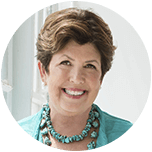 A native of St. Petersburg, Florida, she earned a B.A. in journalism from The University of Georgia. After a 14-year career working as a reporter at newspapers including The Savannah Morning News, The Marietta Journal, and The Atlanta Journal-Constitution, where she spent the final ten years of her career, she left journalism in 1991 to write fiction.

Her first novel, Every Crooked Nanny, was published in 1992 by HarperCollins. She went on to write ten critically acclaimed mysteries under her real name, Kathy Hogan Trocheck. In 2002, she assumed the pen name Mary Kay Andrews with the publication of Savannah Blues. In 2006, Hissy Fit became her first New York Times bestseller, followed by fourteen more New York Times, USA Today and Publisher’s Weekly bestsellers. To date, her novels have been published in German, Italian, Polish, Slovenian, Hungarian, Dutch, Czech and Japanese.

She and her family divide their time between Atlanta and Tybee Island, GA, where they cook up new recipes in two restored beach homes, The Breeze Inn and Ebbtide—both named after fictional places in Mary Kay’s novels, and both available to rent through Tybee Vacation Rentals. In between cooking, spoiling her grandkids, and plotting her next novel, Mary Kay is an intrepid treasure hunter whose favorite pastime is junking and fixing up old houses.