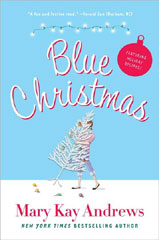 It’s the week before Christmas, and antiques dealer Weezie Foley is in a frenzy to garnish her shop for the Savannah historical district decorating contest, which she intends to win. Weezie is ready to shoot herself with her glue gun by the time she’s done, but the results are stunning. She’s certainly one-upped the owners of the trendy shop around the corner, but suddenly things start to go missing from her display, and there seems to be a mysterious midnight visitor to her shop.

Still, Weezie has high hopes for the holiday—maybe in the form of an engagement ring from her chef boyfriend. But Daniel, always moody at the holidays, seems more distant than usual.

Throw in Weezie’s decidedly odd family, a 1950s Christmas-tree pin, and even a little help from the King himself (Elvis, that is), and maybe there will be a pocketful of miracles for Weezie this Christmas Eve.

I was just hot-gluing the last popcorn-and-cranberry strand to the second of two five-foot-high topiary Christmas trees when my best friend came breezing into Maisie’s Daisy.

BeBe Loudermilk stopped dead in her tracks and gazed around the first floor of my antiques shop, wrinkling her nose in distaste.

She gestured toward the half-empty crates of apples, oranges, and kumquats scattered around my worktable, at the halved pineapples and the pomegranates spilling out of grocery sacks, and at the freshly fallen drifts of popcorn littering the floor.

“What the hell?” she said dramatically. There are very few statements BeBe makes that are not laden with drama.

“Are you now turning to fruit vending as a sideline?” She shook her head sadly. “And I thought you were doing so well with the antiques.”

“Christmas decorations,” I said, pressing the popcorn strings onto the surface of the topiary tree, which I’d already covered with what seemed like a whole orchard full of tiny green crab apples and kumquats. “For the historic district decorating contest.”

With one tentative fingertip, she tapped the tree I’d completed, knocking off a kumquat, which rolled onto the floor, joining half a dozen other pieces of fallen fruit.

“Cute? Is that all you can say? Cute? I’ve spent three whole days with this project. I’ve blown a good three hundred dollars on fresh fruit and nuts and Styrofoam forms, and strung what feels like ten miles of popcorn and cranberries. And just look at my hands!”

I held them out for her to see. There were needle pricks on my fingertips, hot-glue burns on my palms, and multiple bandages from self-inflicted skewerings.

“Because,” I said, “I am, by God, going to win the commercial division decorating contest this year, even if I have to cover the entire surface of this building with every piece of fresh fruit in Savannah.”

“Pride,” I said. “Last year I really thought I had it sewn up. Remember, I did that whole deal with the gilded palmetto fronds and magnolia leaf swags? And I had all the dried okra pods and pinecones? And I didn’t even make honorable mention? They gave first place to that stupid boutique on Whitaker. Can you believe they won with those lame-o kudzu vines and hokey bird’s nests and stuffed cardinals? I mean, stuffed birds! It was absolutely Hitchcockian!”

“A tragic oversight, I’m sure,” BeBe said, looking around the shop. “Remind me again why it was so crucial that I come over here today?”

“You promised to watch the shop,” I said. “There’s an auction at Trader Bob’s, over in Hardeeville, that starts at noon. This close to Christmas, I can’t afford to close up while I go on a buying trip. I was also hoping you might help me put up all the decorations before I leave in an hour.”

She sighed. “All right. What are we doing?”

I gestured toward the pair of topiary trees. “Help me drag these outside. They’re going in those big cast-iron urns by the front doors. Then we’ve got to tack up the over-door plaque with the pineapples and lemons and limes, and swag the grapevines around the show windows. I’ve got two kinds of grapes—green and red, and we’ll hot-glue those once the vines are in place. Then the only thing left is the window display. But I’ll set that up once I get back from Hardeeville.”

With a maximum amount of huffing and puffing, and some very un-Christmas-like swearing when BeBe broke an acrylic nail, we managed to get the decorations in place.

“There,” I said, standing out on the sidewalk, gazing at our masterpiece. “Take that, Babalu!”

“Babalu them,” I said, pointing across Troup Square.

“My nearest and queerest competition.”

“That’s not very nice,” she said. “I thought you loved gay men.”

“You don’t know Manny and Cookie,” I told her.

Manny Alvarez and Cookie Parker had opened their shop on Harris Street the previous spring. Manny was a retired landscape designer from Delray Beach, Florida, and Cookie? Well, Cookie claimed he’d been a Broadway chorus boy in the road show of Les Misérables, but he was fifty if he was a day, going bald, and weighed close to three hundred pounds.

“I tried to be nice and welcoming. I took flowers over there on their opening day, invited them to dinner, but since the minute they opened, they’ve been trying to put me out of business,” I told BeBe. “They’ve tried to snake some of my best pickers. They called up the city and complained about my customers parking in loading zones; they even went to the gift mart and came back with the exact same line of aromatherapy candles and bath salts I carry, and now they sell them for two bucks cheaper.”

“The nerve!” BeBe said. She craned her neck to look across the square at their shop. “Looks like they’re working on their Christmas decorations too. Must be half a dozen men swarming around over there. Wow, look. They’ve got like a phone company truck with one of those cherry-picker buckets hanging lights along the front of the building.”

“I’m sure whatever they do will be gaudy as hell,” I said, flouncing back into the shop with BeBe following close behind. “Remember what they did for Halloween? The whole façade of the building was a red devil, with the shop’s windows lit up with yellow lights as the devil’s eyes.”

“They blinked off and on all night. I thought I was having a seizure the first time I looked over there and saw it. It damn near drove me nuts,” I said. “And it was so over the top.”

“Not Savannah at all,” BeBe agreed. “But flashy. You gotta give ’em that.”