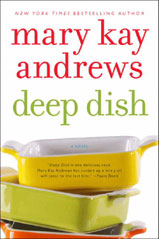 Chef extraordinaire Gina Foxton doesn’t expect anything to be handed to her on a platter. After years of hard work, the former runner-up Miss Teen Vidalia Onion is now the host of her own local Georgia public television show called Fresh Start, and she’s dating the show’s producer.

But when her show gets canceled, and she catches her boyfriend in flagrante delicto with the boss’s wife, Gina realizes that she’s meant for bigger and better things. The Cooking Channel is looking for its next star, and Gina is certain that she fits the bill. Trouble is, the execs also have their eye on Mr. “Kill It and Grill It” Tate Moody, the star of a hunting, fishing, and cooking show called Vittles. Tate is the ultimate man’s man, with a dog named Moonpie and a penchant for flannel shirts. Little does Gina know, though, that she and Tate are soon to embark on the cook-off of their lives.

One more week. Gina repeated the words to herself as she stood on the set, her makeup already starting to melt under the hot lights trained on her.

Five more days, two shows a day. Ten shows. And the season would be over. She would have two weeks to rest. Two weeks with no makeup. No heels. No cameras. She would let her jaw muscles relax. Not smile for fourteen days. No cooking either, she vowed, knowing immediately that was one promise she couldn’t keep. Right now she might be sick of smiling, sick of staring into a camera, sick of explaining why you had to let a roast rest before carving it, sick of chopping, dicing, slicing and sautéing. But that would pass, she told herself. Just ten more shows.

Gina took a deep breath and smiled up at the camera trained on her. “Ready.”

Her brow wrinkled in intense concentration as she carefully whisked the Parmesan cheese into the bubbling pot of grits on the front burner of the cooktop.

“Turn the pot toward the camera so we can see the label,” Jess said quietly from the table where she usually sat beside Scott, watching through the monitor on the laptop. Where was Scott, Gina wondered? Jessica DeRosa, his assistant producer, was only twenty-four, just a couple years out of film school, and she was probably quite capable of directing a show on her own, but Scott was such a control freak, he rarely let her.

Without warning, the gas flame under the pot flared up, and then just as suddenly died. Gina stared down at it, grimacing in disbelief.

“You’re frowning,” Jess commented. “Come on, Gina, don’t make it look so hard. Remember what Scott says. These recipes should look so easy, a trained chimp could fix ’em blindfolded.”

The cameraman snickered, and Gina looked up to give Eddie a stare of disapproval.

“Not funny,” she said. But it wasn’t Eddie, the overweight, balding veteran of three seasons’ worth of her shows, behind the camera. This cameraman was a kid, with a frizzy shock of blond hair sticking out from under a red bandana worn piratelike, around his forehead.

Where was Eddie, she wondered? Were he and Scott in some kind of meeting elsewhere—maybe over at the Georgia Public Broadcasting offices?

“I’m not frowning because the recipe won’t work,” Gina said. “The darned stove is on the fritz again. The flame keeps flickering out. I thought Scott said we were gonna get a new stove before the season was over.”

Jess shrugged. “I guess we’re just gonna make do with this one for the last week. Does it make any difference?”

“Only if we want viewers to believe I know better than to try to cook grits on a cold stove.”

Perky, that’s what Scott always insisted on. Nobody really cared how your food tasted, as long as you looked perky and happy while you were fixing it. And sexy. Which was why she was wearing a scoop-neck tank top that showed off her tanned shoulders and shapely arms, instead of the bib apron with “Gina Foxton” embroidered on it in flowing script that she’d worn the previous season, before Scott took over the show. And her career.

“Now add the cheese,” Jess called. “And tell us why you need to keep stirring.”

Gina made a show of turning down the burner, even though in reality, the burner was stone cold and now seemingly inoperative.

“Once your grits reach the boiling point, you want to turn the heat way down, to keep them from burning,” she said. “Now whisk in your cheese, which you’ve already grated, and if it looks too thick, you can add some more of the cream to make sure you’ve got the right consistency.”

She reached for the bowl of Parmesan and dumped it into the hot grits, stirring rapidly. But now, despite Jess’s directions to the contrary, she was frowning again.

She sniffed as her nose, always hypersensitive, alerted her that something was amiss.

What was that smell? She sniffed again and realized, with horror, that the aroma wafting from the pot was not the honest corn smell of her stone-ground grits, nor the smell of homemade chicken stock, nor the fresh scent of cooking cream.

No. This . . . this smell . . . resembled nothing more than the stink of melting polymer.

“Gawd, y’all,” Gina exclaimed, shoving the offending pot away, toward the back of the burner. “This stuff reeks.” As sometimes happened, usually when she was overexcited or totally aggravated, her carefully moderated accent-eradication coaching fell away in an instant. “Jee-zus H. You-know-what,” Gina said. “What is this stuff?”

The kid behind the camera guffawed.

Gina reached over to the tray of ingredients her prep cook had placed on the countertop, and grabbed the plastic tub of grated cheese. Without her reading glasses, she had to hold the tub right up to her face to read the label.

“Cheez-Ease? Is this what we’ve come to? Y’all have sold my soul for a tub of dollar-ninety-eight artificial cheese made out of recycled dry-cleaning bags?”

Gina dipped a spoon into the pot of grits and tasted. “I knew it,” she said. “And that’s not cream, either. Since when do we substitute canned condensed milk for cream?”

Jess stared down at her notes, then looked up, a pained expression on her face. “We’re having budget issues. Scott told the girls they should substitute cheaper ingredients wherever necessary.”

“He didn’t say anything about it to me,” Gina said, walking off the set and toward the table where Jess sat.

She hated to make a scene, hated to come across as a prima donna or a food snob. But you couldn’t have a show about healthy southern cooking, a show called Fresh Start, for heaven’s sake, if you started to compromise on ingredients.

1. Why does Scott Zaleski’s infidelity imperil Gina Foxton’s job at Fresh Start? Based on his behavior, how genuine is Scott’s remorse for his actions?

2. How does the strong sibling bond between Gina and Lisa relate to their feelings for their domineering mother, Birdelle?

3. How does D’John accidental sabotage of Gina’s hair enable her to embrace a new self-image? How would you react in a similar scenario?

4. Of the many recipes and dishes described in Deep Dish, which was your favorite and why?

5. What individual roles do Iris and Inez play in manipulating the winner of the Food Fight contest?

7. How do the frustrations of filming a reality TV show on a remote island contribute to bringing Gina and Tate together romantically?

8. How does the author’s use of humor and satire in the novel impact your appreciation of the plot of Deep Dish?

9. To what extent does Gina’s inability to commit to Tate seem grounded in her own insecurities?

10. What does Tate’s willingness to wait for Gina to come around and recognize his love for her and her own feelings for him reveal about his character?

“Deep Dish is one delicious read. Mary Kay Andrews has cooked up a tale y’all will savor to the last bite.” -Paula Deen

“It moves fast. Andrews’s readership will eat this one up.” -Publishers Weekly

“Humor abounds as the two rivals lock horns in their quest for the brass ring. Colorful secondary characters add to the hilarity… Big helping of fun.” -Library Journal