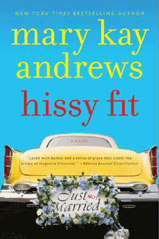 The night before her wedding, in the middle of an oh-so-smart rehearsal dinner, interior decorator Keeley Murdock chances upon her fiancé and her maid of honor “doing the deed.” Keeley pitches the hissy fit of the century, storms out and earns herself instant notoriety in her tiny hometown of Madison, GA.

Over the next few days, Keeley has to deal not only with the embarrassment of a broken engagement but also with the financial pressure her ex’s powerful family puts on her business. Rescue comes in the form of a new face in town, a wealthy red-headed stranger with an impossible agenda. As the new owner of the local run-down bra plant that he plans to revive along with the tiny town, Will Mahoney hires Keeley to completely redecorate the dilapidated antebellum mansion he plans to restore in record time. As Keeley dives into her new, nearly impossible project, she inadvertently unearths long-buried demons from her past and learns that for a small town, Madison holds many dark secrets.

Ultimately, Keeley finds that true love can come even to those who throw humdinger hissy fits. HISSY FIT is a delicious social satire that will be sure to satisfy fans of fine fiction.

If it had not been for my fiance’s alcoholic cousin Mookie I feel quite sure that my daddy would still be a member in good standing at the Oconee Hills Country Club. But Mookie can’t drink hard liquor. She can drink beer and wine all day and all night and not bat an eyelash, but give her a mai-tai or, God forbid, a margarita, and you are asking for trouble.

It was my rehearsal dinner, which the Jernigans were hosting, and I was the bride-to-be, so I don’t believe I should have been the one responsible for keeping a grown woman and mother of two away from the margarita machine, even if she was one of the bridesmaids.

Nonetheless, I was the one standing there when Mookie went spinning out of control across the dance floor, and I was the one who got sprayed with a good six ounces of strawberry margarita. And across the front of my blue raw silk Tahari dress too.

“For God’s sake,” snapped GiGi, my mother-in-law-to-be. She of course had neatly sidestepped Mookie, leaving her own pale pink beaded gown spotless. “I told you not to have her in the wedding. You know how she gets.”

“Keeley,” Mookie yelped, lunging at me with her half-empty glass. “I am sooooo sorry. Let me help you get cleaned up.”

She proceeded to dump the rest of her drink down my back.

Mookie’s mother, who is used to this kind of behavior, snatched her up by the arm and started dragging her toward the door so she wouldn’t cause any more of a scene, and all the women closed ranks around me, dabbing and fussing until I wanted to scream.

Actually, I’d been wanting to scream for several weeks now.

A.J. had had enough too. “Can’t we just go somewhere and screw our brains out for a couple weeks, then come back and be normal?” he’d asked the night before the rehearsal dinner.

It had been a busy week. I’d already endured the “Sip ‘n See Tea,” where everybody in the county came by my daddy’s house to paw over my wedding loot, and the bridesmaids’ luncheon where GiGi let it be known that she thought it was awful my mama hadn’t been invited to the wedding. As if I even knew where Mama had been living for the past twenty-some years.

And that was just the solo stuff. That very night A.J. and I had suffered through the “His ‘n Her Barbecue Shower” given by one of his former fraternity brothers.

At the time he asked this question, A.J. was modeling the Hot Stuff! barbecue apron and padded oven mitt, which had been a shower gift from his Aunt Norma. To be perfectly honest, A.J. was naked under the apron. And he wasn’t wearing the mitt where his Aunt Norma had intended.

I had A.J. backed into the corner with the barbecue tongs, and then one thing led to another, and pretty soon we were rolling around on the floor of his apartment, and my chef’s hat came off along with the rest of my clothes, and the next thing you know, A.J. was having one of his attacks.

“Hee-upp! Hee-upp.” His whole body arched backward. I pushed him away, not startled really. A.J. gets like that sometimes when he’s, uh, in the throes.

“Breathe, baby, breathe,” I instructed, slithering out from under him.

I scrambled to my feet, ran to the sink, and filled a cup with water. “Come on, A.J.,” I said, helping him to his feet. “It’s better if you stand up. Come on, sugar, drink some water for Keeley.”

“Another one,” I urged, rubbing his bare back. He caught my free hand and slid it down his belly. The man never stops trying.

“No, now,” I said, giggling and moving away. He pulled me back toward him. I held out the cup. “Not until you drink all this water.”

He frowned but started sipping.

“I know what works,” he said, getting that look in his eye again. “Come back over here and rub on me again.”

But I’d picked up my clothes and was already hurrying into the bedroom to get dressed.

I pushed the button on the doorknob. “I know,” I called through the locked door. “I tricked you.”

By the time he found the key to the bedroom door I was just zipping my skirt.

“Aw, Keeley,” he said, his lip thrust out in that adorable pout of his. “I wanted us to do it one more time tonight.”

I tried to kiss the pout away, but he wasn’t having it.

“A.J.,” I said, pushing his hands away from the button he was unfastening.

“Now, really. The wedding’s just a few days away. I have an early morning meeting and a ton of stuff to do. I can’t be staying over here fooling around with you all night.”

“Come on, baby,” he whispered, sliding the zipper on my skirt down while pushing my skirt up toward my waist. “Once we’re married, it won’t be as much fun as this. We’ll be all legal and stuff.”

1. What do you think of Keeley’s reaction to her fiance’s behavior at their engagement party? Does she do the right thing? How would you react in a similar situation?

2. Do you find it surprising that Will Mahoney is so determined to impress a woman he’s never met? Why?

3. Is the picture that Mary Kay Andrews paints of life and business in a small town a realistic one?

4. When Keeley gets underneath the facades of some people she’s known all her life, what does she discover? What does this novel say about how well we ever really know each other?

5. What part do antiques play in this story? Are Keeley’s questions about her own past reflected in her search for enduring old furnishings and her wish to create beautiful homes for her clients?

6. Do you feel any sympathy for A.J.? Does he get the comeuppance he deserves? Does Stephanie?

7. What secrets does Keeley unearth in her search to find out about her mother’s disappearance?

8. The novel, which begins with a broken engagement, ends with a wedding. Is the identity of the happy couple a surprise?

Hissy Fit has a little bit of everything in it – romance, decorating magazine, history, mystery, Southern gothic, and screwball comedy – for those looking for some fun summer reading. I highly recommend it.

Keeley Murdock is the type of fiesty heroine I love to read about and wish I could be like. She’s fun to hang around with.

Character development, several intriguing subplots, and wonderful decorative descriptions are the hallmarks of this book. I LIKED the herione. She made great choices; choices that moved the plot along yet kept me guessing. I couldn’t wait for the end of the book, just to see how Ms Andrews tied up all the loose ends. Just as an aside, I also really enjoyed the interior decorating descriptions. What fun. This book is a great beach read that I would recommend to anyone wanting an entertaining time.

Hissy Fit‘s got a little of everything – romance, intrigue, mystery, humor – even decorating hints and a recipe – in an easy-to-follow, can’t-put-down novel.

Hissy Fit was a fun book with a bit of a mystery entwined. Lots of laughs interspersed with an interesting mystery made this for a fast and entertaining read.

A joy ride in bright yellow Cadillac convertible! Drool-inducing with the description of antiques and fabrics. Hissy Fit is Southern Charm at its finest!

With its Southern charm and wit, a page-turning mystery, laugh out loud comedic scenes, and real emotion throughout, Hissy Fit has everything a reader wants.

I started laughing on page 1 and continued until the last page except for the few places where it made me cry. This book was everything I hoped it would be! Keeley reminded me of Janet Evanovich’s Stephanie Plum character except that no one was beating up or shooting at Keeley.

I loved this book! It was so funny and I just want to give it to every woman I know. Fun, fresh, and just simply delightful. Keep ’em coming, please!

A roller coaster ride. You won’t be able to put it down!

Mary Kay Andrews has given us a girlfriend with a big heart and a bigger sense of humor. She takes us on a search into her past, on an adventure in her present, and gives us a glimpse of her bright future, all the while showing us what’s really going on behind the scenes in a small town Deep in the Heart of Dixie. And honey, trust me; you’ll be tickled you came along for the ride.

Mary Kay Andrews knows a Hissy Fit when she writes one. She has the Southern psyche down pat. Her characters can take you ‘down home’ if you are a Southerner, and they let you stop by and visit a spell if you hail from anywhere else.

As thick with southern wit, charm and suspense as the air on a muggy summer night in Georgia!