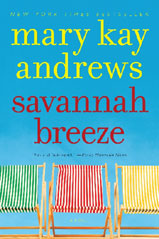 In this eagerly awaited sequel to Savannah Blues, Southern belle BeBe Loudermilk loses all her worldly possessions thanks to a brief but disastrous relationship with the gorgeous Reddy, an “investment counselor” who turns out to be a con man. All that’s left is a ramshackle 1950s motor court on Tybee Island-an eccentric beach town that calls itself a drinking village with a fishing problem.

Breeze Inn is a place where the very classy BeBe wouldn’t normally be caught dead but, with no alternative, she moves into the manager’s unit, vowing to make magic out of mud. The work is grueling, especially dealing with the cantankerous caretaker, a fishing captain named Harry who’s trying to earn enough dough to get his boat out of hock. With the help of Harry and BeBe’s junking friend Weezie, she soon has the motel spiffed up and attracting paying guests.

Then there’s a sighting of Reddy in Fort Lauderdale, and BeBe decides to go after him. She puts together a posse, and with the irrepressible Granddaddy Loudermilk snoring in the backseat of the Buick, heads south. The plan is to carry out a sting that may be just a little bit outside the law but that, with any luck at all, will retrieve BeBe’s fortune and put the dastardly Reddy in jail where he belongs. And maybe Harry, who’s looking more hunky every day, will finally get his boat back.

He was introduced to me as “Reddy” — short for Ryan Edward Millbanks III. And I should have known better. He was younger. Too young. Sexy. Too sexy. Dead sexy. Exquisite manners. And as he leaned in, kissing me lightly on the cheek, I nearly fainted from the pheromones the man emitted. “I’ve heard so much about you from your ex-husband,” he whispered, his mustache tickling my ear.

Alarms should have gone off. Sirens, blinking lights. Robotic voices should have warned me away. But the band was playing something Gershwinish, and I wouldn’t have listened anyway. I only heard what I wanted to hear.

At the mention of my ex, I looked around the tightly packed ballroom with alarm. “Richard? What’s Richard doing here? They were supposed to notify me when he was released.”

Reddy looked confused and laughed to cover up his embarrassment. “Richard? But . . . Sandy Thayer told me, I mean, well, Sandy said you were his ex-wife. That is, he pointed in this direction and suggested I come talk to you. In fact, he suggested you might need rescuing from your date. You are BeBe Loudermilk, have I got that right?”

Now it was my turn to laugh. “Oh, Sandy. Yes, you’ve got that right. Sandy is my ex. Or I’m his. Twice, in fact. Sorry, I’ve been drinking wine all night. As for my date, I’m not sure he remembers he brought me.” I grimaced in the direction of Tater Love, my so-called date, who’d spent most of the evening drooling down the front of my ball gown, and who was now draped over the bar, consuming one beer after another.

Tater was a last-minute fix-up, and I should have known better, but it was the Telfair Ball, which was the social event of the year in Savannah, and I’d already paid for the tickets, and it wasn’t as though my former fiancé, Emery Cooper, would be joining me.

Emery, one of the Cooper-Hale Mortuary Coopers, had called long distance, the previous week, to let me know that he and his ex-wife were on their way to Jamaica, to be remarried on the beach, which was the site of their first wedding. And their second honeymoon.

I thought I handled the news rather well. I took the salmon steaks I’d bought for our dinner that evening, drove over to his town house on Lafayette Square, and slid them through the mail slot in the door. That way, when Emery and his new bride returned home in a week, they’d have something to remember me by.

There was no way I was going to skip the Telfair Ball. For one thing, I was on the host committee. For another, by now, everybody in town knew that Emery had thrown me over for Cissy Drobish, the bucktoothed millionairess mother of his three children. It wouldn’t do to have people talking about me behind my back. If they were going to talk, by God, they could just do it to my face.

“Hold your head up high, girl,” I could hear my late father saying to me, nudging me as I slumped down in the pew in church. So I did as I was taught. I’d spent the whole day of the ball getting ready for battle: manicure, pedicure, facial, herbal massage, and new honey-blond highlights in my hair. I’d gotten all my big-girl jewelry out of the safe-deposit box, and had Roi, my hairdresser, pile my hair on top of my head so everybody could see that I hadn’t returned Emery’s diamond earrings.

However fabulous I looked, however, did not change the fact that I was stuck for the evening with Tater Love, friend of a friend of a friend, confirmed bachelor, who’d been too cheap to rent the evening shoes to go with his tux. Scuffed-black-loafer Tater Love. Cocktail-sauce-on-his-shirtfront Tater Love. It was going to be a very long evening. Which was why I’d decided to anesthetize myself with chardonnay as soon as we arrived at the dance.

Reddy took my elbow and guided me firmly from the dance floor to a remote corner of the ballroom occupied only by a grotesque marble statue of an unidentified Greek goddess and a large potted palm.

“About my exes — ” I started to explain.

“Shhh,” Reddy said, putting a finger to my lips. “Be right back,” he promised. And when he reappeared, he had a plate of lobster in one hand and a pair of crystal flutes in the other. He lifted the front of his dinner jacket — it looked Armani, but I couldn’t be sure — and extracted an unopened bottle of Moët & Chandon from the waistband of his trousers.

Which should have signaled another set of alarms — beware of men bearing gifts in their pants.

He popped the champagne cork with one smooth, expert motion — I was soon to learn that he was an expert on many, many things — and poured a glass for each of us.

Reddy clinked his flute lightly against mine. “To new beginnings,” he said, and he smiled that rogue smile.

And that was the end of all my good intentions.

1. Were you fooled by Reddy? Were there any clues that he was trouble?

2. Can you imagine losing everything you own in the world, even your clothes? What do you think that you would do?

3. Is this a particularly Southern novel? If so, what are the elements that make it that way?

4. BeBe is a woman who thinks she knows what she wants in life. How does this stand in her way?

5. What does Andrews’s portrayal of BeBe’s grandparents have to say about aging? Did you find these characters frustrating, charming, or both?

6. Do you believe that people can really change? How do BeBe and Harry change each other? Is this change believable?

8. Each of the characters in this story has pride, and shows it in different ways. How do we see this, and what part does pride play in what happens?

9. Would you say that this is a feminist novel? Why or why not?

“This sequel to SAVANNAH BLUES is impossible to put down as readers never know what outrageous comments or actions the characters will take.”