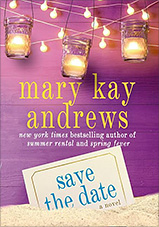 A wedding florist finds love and trouble in this delightful new novel by The New York Times bestselling author of Ladies’ Night.

A Savannah florist is about to score the wedding of a lifetime-one that will solidify her career as the go-to-girl for society nuptials. Ironically, Cara Kryzik doesn’t believe in love, even though she creates beautiful flower arrangements to celebrate them. But when the bride goes missing and the wedding is in jeopardy, Cara must find the bride and figure out what she believes in. Maybe love really does exist outside of fairy tales after all.

1. Cara Kryzik is a bit of a loner. What factors contributed to her cutting herself off a bit from others? How different would Cara’s experience have been in recovering from her divorce and weathering the storms in her professional life if she had a couple of close girlfriends? Who do you envision as Cara’s closest friends as the story draws to a close?

2. How do you think Cara’s rootless upbringing (she went to six different schools between elementary and high school) affected her in adulthood? Why do you suppose she had such a tough time feeling at home in Savannah? Why and how do you envision that changing after the end of the book?

3. What did you think of the Colonel’s relentless insistence at being reimbursed for the money he had loaned to Cara? Why do you think the Colonel could not make himself more emotionally available to his daughter? How would Cara’s adult life have been different if her father was more supportive? By the end of the story, do you have hope that Cara’s relationship with her father will change for the better?

4. Is Gordon Trapnell a supportive father to his daughter Brooke?

5. Does Patricia Trapnell have any redeeming qualities as a person, stepmother, wife, or friend? Why do you think she cares about Brooke and Harris’s wedding so much? What are her motives in being so involved in the planning?

6. Why do you think Marie avoids confrontation with Patricia? With Gordon? If you were Marie, would you have stood up to Patricia and/or to Gordon?

7. Did you agree with Brooke’s decision to call off her wedding to Harris? Why do you think Harris would have been content to marry Brooke? Do you think they could have lived happily as a married couple? What would their married life have been like?

8. Do you think Pete Haynes figured into Brooke’s decision to call off her wedding? Were you surprised that Pete rebuffed Brooke’s advances in the cabin on Cumberland Island? Do you think Pete continues to figure in Brooke’s life after the story ends?

9. Why do you think Libba Strayhorn’s relationship with her husband Mitchell has stood the test of time? To what do you attribute their contented marriage?

10. Leo makes several attempts to win Cara back after she divorces him. Do you think Leo genuinely loved Cara? What were his motives in trying to reconcile? Would you have been tempted to go back to him? How is Jack Finnerty different from Leo?

11. What do you think Jack saw in Zoey? Could he have been happy with her? Why did Zoey want Jack back?

12. The two dogs, Poppy and Shaz, figure prominently in the story in Save the Date. How did having a pet help each Cara and Jack individually? How did the dogs help to bring Cara and Jack together?

13. Why do you think Bert falls for Cullen Kane? Does Bert redeem himself as an employee? As a friend?

14. What do you think Cullen’s motives were in buying the West Jones Street that housed Bloom? Why is Cullen so intent on destroying Cara?

15. What did you think of Cara’s reaction to Jack when he bought the West Jones Street building out from under Cullen?

16. In Save the Date we see many different types of weddings and affairs, from minimalist to unique themed affairs to high society extravaganzas. What did you learn about flowers and event planning from Save the Date? How did you approach choosing the flowers for your own wedding? Was it based on budget, color scheme, personal preferences? If you had it to do again, would you approach it differently?

17. What did you think of the unusual wedding that Cara planned for Maya and Jared ant the Knights of Columbus hall? Would you have been comfortable as a guest at that wedding? Why or why not? Have you ever been to a wedding with a non-traditional theme or décor?

18. Cara and Bert make a game of guessing about the chances their married couple have of making it for the long haul. Have you ever had discussions like this surrounding a wedding you attended? Have you had gut feelings about couples making it and not? Discuss instances in which you’ve been proven right and wrong in your hunches.

“A deft mixture of romance and humor in a story featuring a likable protagonist and cute critters: It’s a date Andrews fans won’t want to miss.” —Kirkus Reviews