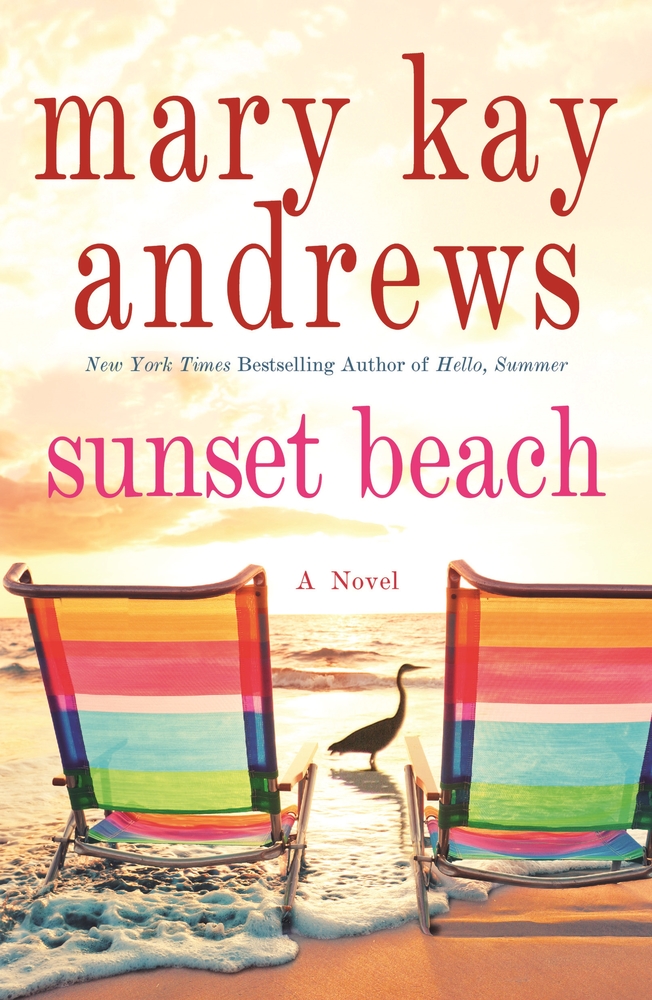 The New York Times bestselling author and Queen of the Beach Reads delivers her next summer blockbuster.

Drue Campbell’s life and career have recently been derailed.  The only thing she has left is the house her mother left her: a ramshackle beach bungalow with a missing roof in the once-sleepy town of Sunset Beach, which is rapidly becoming a hot spot for the rich and well-heeled, who are none too pleased about the shabby eyesore in their perfect neighborhood.

When Drue’s larger-than-life father unexpectedly turns up at her mother’s funeral and offers her a job at his law firm, Drue doesn’t know whether to be grateful or resentful that he has suddenly reappeared. She grudgingly accepts the job sifting through cold callers and shysters looking to get rich quick. But when her attention is caught by a suspicious murder case, Drue finds herself entangled in a decades-old mystery – one that may have dire consequences for Drue and the people she loves.

Drue turned the key in the ignition and the white Bronco’s engine gave a dispirited cough, and then nothing.

“Come on, OJ,” Drue muttered, trying again. This time the engine turned over. She gave it some gas and the motor roared to life.

“Thanks, babe.” She gave the cracked vinyl dashboard an encouraging pat, then shifted into reverse and eased her foot onto the accelerator. The motor gave a strangled wheeze and cut off again. Now every single indicator on the control panel began blinking red.

She tried again, but the third time was not the charm. The engine caught briefly, the Bronco’s battered chassis shuddered, then fell still.

She glanced down at her watch. She now had fifteen minutes to get downtown to work. “No way,” she muttered.

Back when life was good, when she was living in Fort Lauderdale, she would have taken an Uber or called a friend for a lift when the 1995 Bronco she’d bought off Craigslist was having what Drue thought of as PMS. But she hadn’t exactly had time to make friends since moving back to Florida’s west coast, and she no longer had a viable credit card for Uber, or even viable credit, for that matter.

Drue had a vague memory of seeing city buses lumbering past on nearby Gulf Boulevard. She pulled her phone from her backpack, found the transit authority website and schedule, and determined that with any luck, she just might catch a bus that might get her to the downtown St. Petersburg offices of Campbell, Coxe and Kramner in the next thirty minutes. Which would make her late for her first day of work.

She started walking. It was barely eight-thirty, and only April, but the temperature already hovered in the mid-eighties, and within two blocks of leaving her house, her cotton tank top was damp with perspiration and her right knee was throbbing.

Shit. She should have gone back to the house and put on the tight elastic brace the surgeon had given her. In fact, should have been wearing it anyway, even if she hadn’t had to walk five blocks. But the damn thing was so hot. The elastic chafed her skin and gave her a rash, so she left it at home more times than she wore it.

Drue gritted her teeth against the pain and kept walking. She was on Gulf Boulevard now, the busy north–south thoroughfare that threaded through all the tiny beach towns before eventually making a sharp right turn at Treasure Island Causeway, heading east toward downtown St. Pete. A clutch of giggling teenage girls, spring breakers, probably, dressed in bikini tops and microscopic neon-bright shorts with the waistbands rolled down to their navels, approached on the sidewalk, headed in the opposite direction, and made an elaborate show of sidestepping her.

She heard a quavery voice behind her.

“Excuse me, darling.” She turned her head to see an elderly man, his bony bare chest glistening with sweat, power past, pumping small dumbbells in each hand.

She squinted and saw, just half a block ahead, the shaded bus shelter. Thank God. She wasn’t sure if she could walk much farther. Half a block, though. That, she could do. She picked up the pace, trying to ignore the red-hot stabbing pain in her knee.

Briiiing, briiinnng, a bike’s bell and then a booming woman’s voice: “On your left!”

She stumbled over her flip-flop and toppled onto the grassy verge just in time to avoid being mowed down by a white-haired octogenarian wearing wraparound sunglasses and a Tampa Bay Rays sun visor furiously pedaling past on an adult tricycle.

“Up yours,” the woman called, turning around briefly to flip her the bird.

As she struggled to her feet, she saw, almost in slow motion, the city bus passing her by. She winced in pain, but also at the ad emblazoned along the side of the bus.

SLIP AND FALL? GIVE BRICE A CALL! The ad was accompanied by a five-foot-tall airbrush-enhanced color portrait of W. Brice Campbell, arms crossed defiantly, his chiseled chin jutting pugnaciously, a stance Drue knew all too well.

The bus slowed momentarily at the bus stop. The air brakes whooshed. “Stay there,” Drue muttered. “Stay right there.” She broke into her current version of a run, a lopsided, sorry, limping affair.

A young Hispanic woman stepped off the bus, turned, and waved goodbye to the driver.

“Hey,” Drue yelled breathlessly, closing the gap, now maybe only three bus-lengths away. She waved her arms over her head. “Hey!”

The woman turned and gave the stranger a hesitant smile. “Hey.”

The bus’s brakes whooshed again and it started to move.

But it was too late. The bus picked up speed. It moved on. The woman stood by the bus shelter. She was dressed in a gray and white uniform smock, her name, Sonia, embroidered above her left breast.

“Sorry,” she said softly, as Drue approached, limping badly. “Are you okay?”

Drue grasped the back of the bench as she tried to regain her breath. The bench was painted blue and white, with the Campbell, Coxe and Kramner signature logo superimposed across Brice Campbell’s visage. HAVE A WRECK? WE’LL GET YOUR CHECK!

“No,” Drue managed, as she collapsed onto the bench. She jumped up immediately, gingerly extracting a half-inch wood splinter protruding from her right butt cheek. “No. Definitely. Not. Okay.” She looked down at the screen-printed face of Brice W. Campbell. Her new boss. Her long-lost father, and as always, a major pain in the ass.

A job in his law firm had been the very last thing Drue had wanted from her long-estranged father. But what choice did she have? That five-second midair kiteboard collision three months earlier, and her mother’s subsequent death, only reinforced the fact that she no longer had any reason to stay in Fort Lauderdale.

Drue had been adrift, self-medicating with tequila and Advil and wallowing in self-pity on the day of her mother’s funeral. As she was leaving the memorial service, with the bronze urn containing Sherri’s remains tucked under her arm, she’d been shocked to spot a well-dressed businessman standing uneasily at the back of the church.

At first, she wasn’t even absolutely sure it was really him. His hair was longer, touching the collar of his open-neck shirt, and flecked with silver. He was tanned and slim, and in his expensive tailored blazer and sockless Gucci loafers looked distinctly out of place in the former fast-food restaurant turned Fortress for All Faiths Chapel of Prayer.

She approached him warily. “Dad?”

She’d endured the embrace with what she thought was admirable forbearance.

“What are you doing here?”

He shifted from one foot to the other. “Why wouldn’t I be here?”

“I mean, how did you know? That Mom died? I didn’t even put an obituary in the paper until today.”

“Sherri called me. To tell me she was sick. And I asked the hospice people to let me know … when it happened.” He glanced around the church, which was nearly empty now. “Look, can we go somewhere else to talk about this?”

“Like where?” Drue wasn’t about to let him off that easy. Twenty years ago, he’d shipped his sullen teenage daughter across Florida, from St. Pete back here to Lauderdale, choosing peace with his second wife and her obnoxious sons over loyalty to his only daughter. He’d dutifully sent the birthday cards and child support checks right up until her eighteenth birthday, but she hadn’t laid eyes on him since that boiling hot summer afternoon so long ago. She wasn’t about to let him waltz in here today and play the grieving dad and ex-spouse.

“I thought maybe we could go to lunch somewhere.” His blue-gray eyes took in her frumpy black dress, the only remotely funeral-ready dress she owned, and the too-large black pumps, which she’d appropriated from Sherri’s closet.

He let out a long, aggravated sigh. “Why? Because your mom is gone and I’m now your only living relative. And because there are some business matters we need to discuss. Okay? Can you just cut me some slack and go to lunch? Or do you really need to keep busting my balls for the rest of my life?”

She shrugged. “I guess I could do lunch. Where do you want to go?”

“I heard there’s a bistro on Las Olas that has great mussels.”

“Taverna.” Why was she not surprised that he’d chosen the most exclusive, expensive restaurant in town?

Outside, in the parking lot, Brice pointed a key fob at a black Mercedes sedan and clicked it. Drue went to the backseat and opened the door.

He stood by the driver’s side, looking puzzled. “You’re getting in the backseat?”

“No,” Drue said, carefully stretching the seat belt across the bronze urn. “Mom is.”

“Andrews has a gift for writing fascinating characters and captivating dialog.”—Publishers Weekly

“Sunset Beach is another page-turner from the always charming Mary Kay Andrews.”—PopSugar

“Andrews’ latest annual big beach read combines mystery, family secrets, a hint of romance, and a little bit of home renovation…Andrews’ style ensures that this will be a relaxing read.”—Booklist
“Sunset Beach is a rollicking fun read with a heroine who’s easy to root for and enough mysteries, murder and mayhem to keep you turning the pages… Once again, Mary Kay Andrews has worked her magic to produce a tale that’s sure to please.”  —BookReporter.com

“Sunset Beach incorporates all the usual elements of a Mary Kay Andrews’ novel: a sunny, sand-strewn setting, a dash of romance and plenty of humor and warmth. The addition of murder and intrigue makes this novel an unputdownable tale.” – The Augusta Chronicle