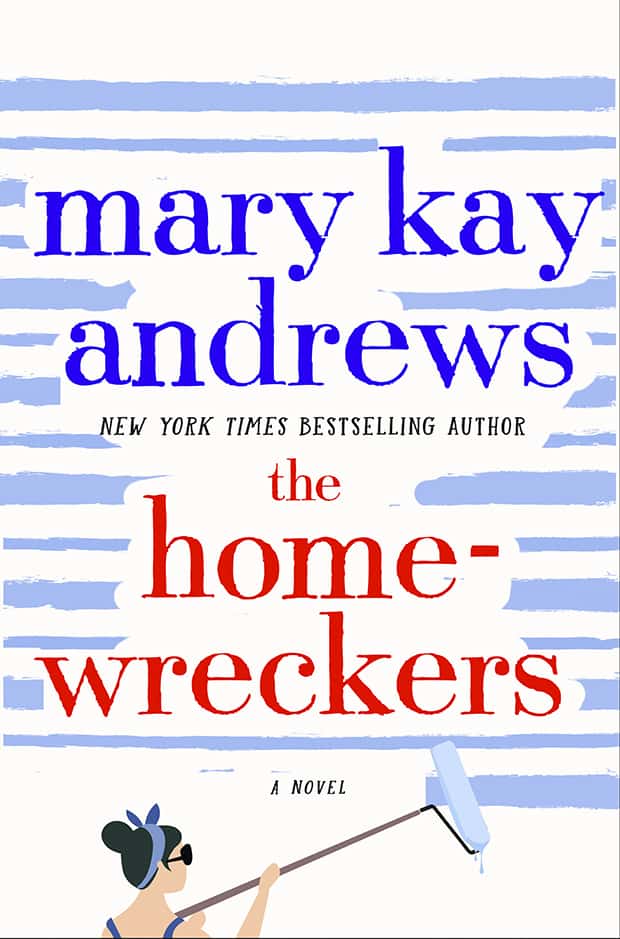 Summer begins with MKA, in this delightful summer read about flipping houses, and finding true love.

Hattie Cavanaugh went to work helping clean up restored homes for Cavanaugh & Son Restorations at eighteen; married the boss’s son at twenty; and was only twenty-five when her husband, Hank, was killed in a motorcycle accident.

Broken hearted, but determined to continue the business of their dreams, she takes the life insurance money, buys a small house in a gentrifying neighborhood, flips it, then puts the money into her next project. But that house is a disaster and a money-loser, which rocks her confidence for years to come. Then, Hattie gets a once-in-a-lifetime opportunity: star in a beach house renovation reality show called “The Homewreckers,” cast against a male lead who may be a love interest, or may be the ultimate antagonist. It’s a question of who will flip, and who will flop, and will Hattie ever get her happily-ever-after.

“Andrews’ latest is a frothy combination of a hectic old-house-renovation story and a cozy mystery with a hint of romance centered around a likable heroine who has been holding too many feelings at bay. A perfect summer escape.”
—Booklist

“A fun story with twists and turns that will appeal to romantics and cold-case fans alike.”
—Kirkus Reviews

“Andrews sparkles in this fast-paced tale of a reluctant TV star, a driven producer, and a long-dormant mystery on the Georgia coast…The author skillfully navigates the various threads—there’s sexual tension between Hattie and a slew of suitors, and a twisty third act involving Lanier’s fate. Andrews’s fans will eat this up.”
—Publishers Weekly

“Mary Kay Andrews has done it again…produced a feel-good book with just the right mix of tension, mystery, and human drama to satisfy almost any reader.”
—Mystery & Suspense

“Imagine if HGTV and a murder mystery met, fell in love and unexpectedly produced a rom-com.”
—E! Online

“Mary Kay Andrews is the queen of beach reads. This one combines our love of romance, HGTV shows, and murder mysteries. What more could you want?”
—Country Living

“While renovating a house on Tybee Island last year, the Atlanta author discovered old items tucked into the wall that inspired her new book The Homewreckers. Part cozy mystery, part romance, it centers on Hattie Kavanaugh, a young widow starring in a home renovation reality show…In the process of trying to flip a house on TV and solve a mystery, sparks fly between Hattie and the show’s male lead.”
—The Atlanta Journal-Constitution

“Mary Kay Andrews is one of the queens of beach reads, and she’s back again this year with this touching and funny novel.”
—Life Savvy, “2022’s Best Beach Reads”

“seamlessly combines romance and mystery”
—PopSugar, “Romance Novels to Spice Up Your Summer”

As she inched along on her back beneath the rotting foundation of the Tattnall Street house, Hattie Kavanaugh was already having second thoughts. About her insistence on inspecting the corroded cast-iron pipes herself, instead of taking her plumber’s word. About all the money Kavanaugh and Son had already sunk into this 157-year-old magnificent wreck. About not owning one of those wheeled things auto mechanics used—what were they called? Creepers? But mostly, she was having second thoughts about that second cup of coffee she’d gulped just before being summoned to the house they were restoring in Savannah’s historic district.

The call had come from one of their subs, reporting the unhappy news that scrap bandits had struck overnight, stealing the copper tubing from three brand-new air conditioning compressors. An eleven-thousand-dollar hit to their already wildly out-of-control construction budget. And now this.

“Uh, Hattie?” Ronnie Sewell, Hattie’s plumber, was lounging against the bumper of his pickup truck when she and Cassidy Pelletier, her best friend and construction foreman, arrived at the Tattnall Street house that steamy Saturday morning. “We got issues.”

She and Cass followed the plumber around to the rear of the house, where she found a freshly dug trench leading beneath the home’s brick foundation.

“I had a feeling something wasn’t right,” Ronnie said, pointing to the trench. “I decided to get under the house and take a look.”

“The problem is, you got a hunnerd percent crappy old cast-iron pipes under there. And you know how it floods on this flat street, right? And it all drains to the back of this lot. Water’s been collecting under there for no telling how long. Well, it’s all ruint. Rusted, busted, ruint.”

“Oh God,” Hattie moaned. She eyed her plumbing contractor. He was in his late fifties and built like a fire hydrant, with a huge belly that lapped over his belt. “Are you sure? I mean, you went all the way under the house?”

Ronnie shrugged. “I got as far as I could go. It don’t take a rocket scientist.”

Without a word, Hattie walked away. When she returned, she was zipping herself into her own baggy white coveralls. She pulled a bandana from her pocket and tied it around her hair, then fastened plastic goggles over her face.

“What?” Ronnie said, his face reddening with indignation. “You calling me a liar? Hattie Kavanaugh, I been doing business with your father-in-law since before you were born. . . .”

“Calm down, Ronnie,” Hattie snapped. “I had this house inspected before we made an offer on it. Nobody said anything about bad pipes. I’m not calling you a liar, but I need to see it with my own eyes. Tug would tell you the same thing if he were here.”

“See for yourself then.” He turned and stalked off in the direction of his truck, muttering as he went. “Goddamn know-it-all girls.”

Cass bent down and peered at the trench beneath the foundation, at the pool of mud and brick rubble, then looked back at her friend. “For real? You’re crawling down into that swamp?”

“You wanna go instead?”

Hattie went over to a tarp-covered stack of lumber, selected a pair of two-by-fours, and slung them over her shoulders. She shoved the boards under the house, considered, then went back for another pair, laying them beside the first two boards.

“Pray for me,” Hattie said, flattening herself on the boards. “I’m going in.”

Mo Lopez pedaled slowly along in the bike lane. The neighborhood he was passing through was clearly in transition. On one side of the street, brick or wood-frame Victorian-era homes boasted signs of recent restoration, with sparkling new paint jobs and manicured landscapes. There were smaller homes, too, modest Craftsman cottages with bikes chained to wrought-iron fences, porches bristling with fern baskets and potted plants and weedy yards. As he pedaled, an idea began to form in his head.

Savannah, he reflected, was a pleasant surprise. He’d accepted the invitation to speak to television and film students at the Savannah College of Art and Design strictly as a favor to Rebecca Sanzone, the assistant head of programming at the network. One of her former classmates now worked in the SCAD admissions office. Becca, of course, had been much too busy to make the trip herself, and had forwarded the invite to Mo.

“You should go,” she’d urged. “Why sit around town and wait for these network idiots to make up their minds?”

The idiots were Rebecca’s immediate bosses at the Home Place Television Network. The former president of programming had been abruptly fired two months earlier, and the new guy, Tony Antinori, was said to be taking a long, hard look at the HPTV lineup.

Mo was understandably anxious. Killer Garage’s first season was considered a success for a new show, but this second season, viewers weren’t quite as fascinated with watching motorheads spend obscene amounts of money building garages equipped with everything from video-gaming consoles to elevators to full kitchens. The numbers, Rebecca had pointed out, weren’t awful, but they weren’t awfully good either.

He needed a new idea, and he needed it fast. His thoughts drifted back to what Tasha, the SCAD administrator, had told him; that Savannah had the distinction of being the largest intact contiguous trove of original nineteenth-century architecture in the country. This town was a beehive of restoration and renovation activity.

His mind worked as furiously as his legs. On a street called Tattnall, he spied a trio of vehicles parked in front of an imposing three-story Queen Anne Victorian. As he got closer, he saw two pickup trucks that had KAVANAUGH & SON, GENERAL CONTRACTING stenciled on the door.

Mo paused at the curb and looked up at the house. A full-scale restoration was obviously under way. Scaffolding had been erected on the east side of the house, where some of the old wooden siding had been replaced, and other sections had been scraped down in preparation for paint. Piles of lumber were stacked around the yard, and pallets of roofing shingles had been unloaded on the porch.