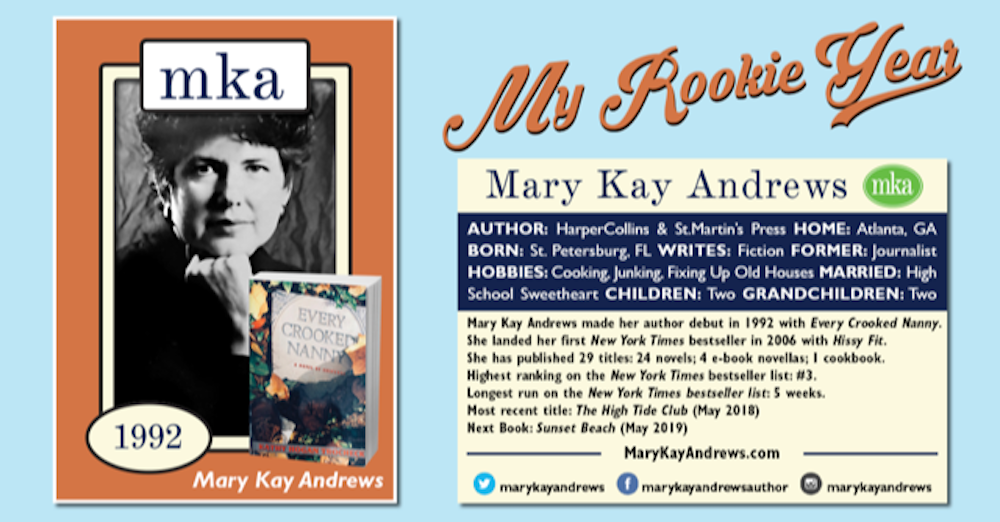 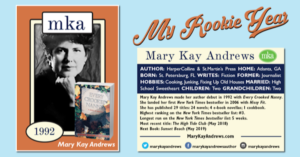 Maybe you didn’t know, but I’ve been living a double life for some time now. Yep. At home, I’m Kathy Hogan Trocheck, mild-mannered junker, wife, mom, grandmother, recovering journalist (I was a reporter for The Atlanta Journal-Constitution for many years) and decorator in denial. But in public, when I’m wearing makeup and not-yoga-pants, I’m Mary Kay Andrews, best-selling novelist and author of 28 novels and (and The Beach House Cookbook) and counting.

Many people aren’t aware that I started my fiction career in 1992 as a mystery writer—penning ten mysteries under my real name, Kathy Hogan Trocheck, including the much beloved Callahan Garrity mystery series. In 2002, when I had an idea for a different kind of book, Savannah Blues, I adopted the pen name of Mary Kay Andrews, which is a combination of my two children’s names—Mary Kay for my daughter who was christened Mary Kathleen, and Andrews, for son Andrew. And poor old KHT went on hiatus. Because of all the hassle of maintaining dual identities, eventually my publisher re-released all the books as being “by Mary Kay Andrews writing as Kathy Hogan Trocheck.”

I always get a laugh when people discover that MKA is in reality KHT. The most common reaction is “I loved those books, but when you stopped writing, I assumed you were dead.”

Not dead at all, I can assure you. And now I’m dropping back onto my sometimes-neglected blog to share the news that my rookie book, Every Crooked Nanny, which is the first in the Callahan series, will be a Kindle Monthy Deal for only $1.99 from Oct.1-Nov. 5, 2018. Download yours now while this deal lasts!

If you haven’t already met Callahan, her irascible mother Edna Mae and the rest of her House Mouse crew, I think you are in for a treat.

Here’s a little of Callahan’s backstory. She’s a former Atlanta police detective, who quits the department due to sexist bosses who don’t think a woman can be a good homicide cop. She gets a private investigator’s license, but when business isn’t as brisk as she’d hoped, in frustration buys a cleaning business called The House Mouse. Callahan and Edna share her home, a Craftsman bungalow in the real Atlanta intown neighborhood of Candler Park.

In Every Crooked Nanny, Callahan’s first outing, she’s hired by an uppity former sorority sister to track down the family’s missing nanny, who, before running off with the family secrets, has gotten a little too cozy with the man of the house.

Because I wrote the eight Callahan mysteries before the advent of Google, Smart Phones or the GPS, my low-tech sleuth relies on good old-fashioned street smarts and shoe leather to solve the crimes that occur in and around Atlanta with unnerving regularity.

Here’s what the critics have said about Every Crooked Nanny
“Fresh, confident, intelligent and amusing. Grab a cold drink, put your feet up, and enjoy yourself.”—Sue Grafton
“Crisp intelligence and earthy wit.”—New York Times
“A clever, colorful page-turner, not to be missed…A high caliber debut.”—Publishers Weekly

I hope you’ll agree—and at $1.99 for the first installment, that you’ll want to binge-read all eight books in the Callahan Garrity series. Here’s the list, from first to last. Enjoy!

To Live and Die in Dixie