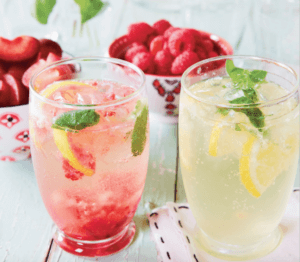 For a fun & easy Easter Sunday brunch menu, try a few recipes from my upcoming The Beach House Cookbook. I demo’d a few of these recipes on Fox5 Atlanta’s Good Day Atlanta morning TV program on Thursday, April 13, 2017. You can access all of these recipes in my new cookbook, which will be in stores on May 2nd. Meanwhile, here’s the recipe for the Cinnamon Roll Bread Pudding. Paired with Prosecco Sippers, Fruit Salad, and Pig Candy, it’s the perfect no-fuss, crowd-pleasing brunch menu. All can be made ahead and are easy to transport if you’re joining family & friends. Just put the casserole into the oven before church or the Easter egg hunt. 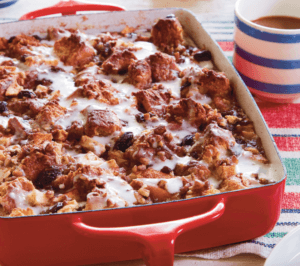 Two of Tom’s favorite grocery-store breakfast treats are cinnamon rolls—those big, gooey ones you buy on a foil tray in the bakery department—and apple fritters. So this is what you would get if an apple fritter were to marry a stale cinnamon roll. Not that a cinnamon roll was ever allowed to go stale in our house. But if that were to happen, you would have a heavenly culi­nary marriage—not to mention a very grateful audience around the breakfast table.

1. Preheat the oven to 350°F. Butter a 7-by-11-inch casserole dish. Combine the raisins and rum and let stand for 30 minutes. Drain, reserving 1 teaspoon of the rum.
2. Beat the half-and-half, brown sugar, milk, egg yolks, vanilla, cinnamon, nutmeg, and salt together in a large bowl until well combined.

3. Cut the cinnamon rolls into 1-inch chunks and add to the egg mixture, tossing well to coat. Stir in the apples, raisins, pecans, and reserved rum. Let stand for 30 minutes or until the bread has absorbed most of the liquid.

4. Spoon the mixture into the prepared baking dish, dot with the butter, and sprinkle with the cinnamon sugar. Place the baking dish in a roasting pan. Pour boiling water into the roasting pan to reach halfway up the sides of the dish. Bake for 50 to 55 minutes, or until the bread pudding is set and the top is browned. Carefully remove the bread pud­ ding from the water bath.

5. To make the icing, whisk the powdered sugar, milk, and rum in a small bowl until smooth. Drizzle the pudding with the icing and serve warm.