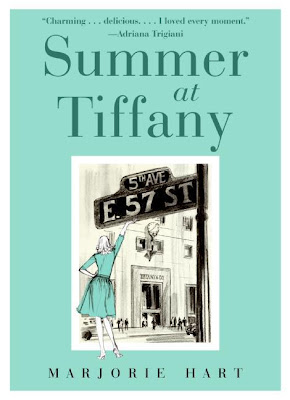 Do you remember the best summer of your life? Marjorie Hart does. The year was 1945 and the war was still on, and she and her best friend, Marty were fresh from the Kappa house at The University of Iowa when they came up with the idea of travelling by train to New York to look for summer jobs at the leading department stores of the day. But when they failed to get jobs there, a serendipitous connection from back in Iowa landed them jobs as pages at Tiffany’s, where they become the first females ever to work on the sales floor. Outfitted in store-provided Tiffany-blue shirtwaist dresses from Bonwit-Teller, the plucky girls managed to live on their $20 weekly salaries by budgeting nickels for subway fares and quarters for automat sandwiches. At work, they brush shoulders with mobsters and celebrities like Marlene Dietrich and Judy Garland, and in their off hours they dance the night away at nightclubs with handsome midshipmen, and experience their first glimpse of the ocean at Jones Beach. And of course, they are living history, hearing of the combat deaths of loved ones from back home and the dropping of the first atomic bomb. They join the celebratory throngs celebrating V-J Day in Times Square and manage to glimpse General Eisenhower during his victory parade.

More than forty years later, now retired from a career as a professional cellist and college arts administrator living in San Diego, Marjorie Hart set out to write her memoir for her children and grandchildren. Serendipitously, she met an editor at a writer’s workshop who saw gold in Marjorie’s account of her diamond-studded summer of 1945. And at the age of 82, Marjorie saw her memoir, SUMMER AT TIFFANY, published.

A few years ago, my editor at HarperCollins sent me Marjorie Hart’s luscious little memoir called SUMMER AT TIFFANY. I read it, I adored it. I bought more copies and sent them to my friend Barb, in Ohio, and my dear little Aunt Alice, in Florida, and to others. And now, finally, Harper has brought SUMMER back out in trade paperback, just in time for Mother’s Day. And Marjorie Hart, who I think is now 86, has a New York Times bestseller on her hands. You don’t have to be a member of what Tom Brokaw calls “The Greatest Generation” to love this book. This is a story for every woman who’s ever dreamed of running away to the big city, of romance, and diamonds and pearls, and even heartache. Buy a copy for your mom, or grandmom, and then buy one to keep too.
Better yet, leave me a comment about the best summer of YOUR life, and I’ll draw five names at random to win FREE copies of SUMMER AT TIFFANY. And no, you don’t have to be a mom to win–no purchase, no strings, just a wonderful read to start off your summer. Your comment must include your email addy so that I can notify you of winners. Drawing closes midnight Sunday May 9.