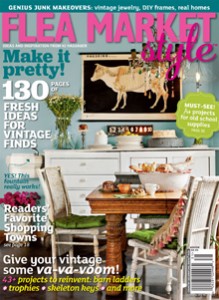 Waaaay back in March I was thrilled to be invited to go on a little Atlanta junk jaunt with flea market rock star Ki Nassauer, the editor and magic-maker behind Flea Market Style Magazine. Ki flew in from L.A. where she lives, her friend flew in from Minnesota to act as her assistant, and we hooked up with an Atlanta-based photographer. What followed was 48 hours of hard-core, full-on extreme junking. Did I love it? You betcha! And here’s the brand-new magazine, with a great ten-page feature on our odyssey.

Because you can’t junk on an empty stomach, we started our day with scones from my neighborhood sugar shack, Sweet n’ Sinful Bakery, where our friend Layne treated us to her bacon-cheddar scones. Mmmm. Bacon. Then we motored down to Scott’s Antique Market for set-up day. It was Ki’s first trip to Scott’s, and even though she shops flea markets all over the country, she was amazed at the depth and variety of primo junk at Scott’s.

Let me tell you, we hit Scott’s like a ton of bricks, shopping both the North and South buildings, plus the outdoor vendors on both sides, with the photographer snapping away, and Ki and I honing in on our favorite junk. We did stop for lunch, and Ki had to experience boiled peanuts. Let’s just say this Midwest gal was NOT a fan.

From Scott’s, we hit three more Atlanta area antique markets, including Kudzu, in Decatur, where Ki fell in love with all the mid-century loveliness, not to mention owner Kate and George’s shop dogs Bella and Charley.  I seriously had to drag the girl out of there so we could hit some more of my favorite junk honey-holes.

Part of Ki’s mission while she was in town was to sample some down-home Southern cuisine. Her first night in town we did the BBQ thing at Fox Bros. on DeKalb Avenue. Sooeeeey pig! She especially loved the sides–like Fox Bros’. famous Tominators–barbecue drenched and cheese topped tater tots. The second night we had dinner at Leon’s Full Service gastro-pub in Decatur. And yeah, the star of that show was Leon’s pommes frites with all those luscious dipping sauces.

On Friday, we went way north–all the way up to Alpharetta to Queen of Hearts Antique Mall, where I actually scored two or three treasures for my antique booth at Seaside Sisters on Tybee Island. Then it was back to midtown Atlanta, where we wandered the aisles of Antiques & Beyond on Cheshire Bridge Road. Ki, who is a horsey kind of girl was seriously jonesing for a vintage coin-operated horse ride, but since it wouldn’t actually fit in her carry-on luggage, she had to leave it behind. This time. Of course we had to make one more food stop before I dropped the girls off at the airport, and Ki wouldn’t let me pass by Kitsch’N 155, the very cool retro diner lunch spot on Clairmont Road in Decatur.

The junk divas flew home, and I went back to work on TFB (the friggin’ book) for next summer. I went on tour for SPRING FEVER, which took me all over the country. And then, early in the second week of July, when I just happened to be home between tour stops, Ki called. There was a lil’ glitch with the photos of our junk jaunt. Actually, a major glitch. All of the photos from our two-day session were gone. Long story short, I invited Ki to come BACK to Atlanta. Luckily, it was a Scott’s weekend–I say lucky because Scott’s is only open the second weekend of every month. And luckily, I was home and free for two days. And Ki was available too. So we did it all over again–only in ONE day instead of two. Somehow, we did it. We junked ourselves into a frenzy, re-shot the feature, and 24 hours later, Ki was back on a plane to California to face magazine deadline hell. All that serious junking was fun–but it was also work, hard, hard work.

The good news is, the second set of photos were great. I got to see my new junk buddy again, I scored more treasures–including the framed glass pinball backboard you see in one shot, the deluxe vintage birdcage, and the fabulous fifties terra-cotta flamingo–which is currently roosting in the front yard of our Tybee Island beach house, The Breeze Inn. And shortly after that second excursion, I got to hang out and go junking with Ki in California, where we agreed we must be sisters from another mother.

I hope you’ll run out and snag a copy of Flea Market Style for yourselves. It’s full of so much vintage junk eye candy you’ll run the risk of overdose. You can’t subscribe to the magazine, it’s newsstand sales only, but you should be able to find it at magazine stands all over the country. I know here in the South I’ve seen it at Publix, Kroger, Wal-Mart, Target and Books-A-Million. And if your favorite store doesn’t carry FMS? Feel free to throw  yourself big ol’ HISSY FIT. And Enjoy!