I’ve been rippin’ up and down the country all summer long, touring for my latest book, Spring Fever. But this week, I decided to take a little time off before heading to Anaheim where I’m attending the Romance Writer’s of America Conference. On Monday I flew out to Los Angeles to do a fun meet-up with my friend Ki Nassauer of Flea Market Style magazine. Ki’s apartment is a fun mash-up of mid-century modern flea market finds mixed with many of the fun junk projects we’ve seen in past issues of the magazine. Since she’d just put the fall issue of the magazine (the one that features a junking trip with moi) to bed, she was ready for some fun. And did we have big fun! We started the trip with a big helping of old school–choosing to do the fun but cheesy Hollywood Home of the Stars tour. Ki researched all the different tours, so we chose the one that puts you in an open-air van, mostly because towns like Beverly Hills don’t allow the big double-decker buses on their streets. While we were waiting for our van pick-up, we moseyed over to the Madame Toussad’s Wax Museum to show some Lucy Love.

Then we climbed aboard our van and took off with our driver, Josh, giving us an unintentionally hilarious, if semi-dubious narration of the haunts of Hollywood stars. “Look!” he exclaimed at one point, “That was Janet Jackson just driving by in that black SUV!” But the scenery was great, and we were able to get great views of some neighborhoods where stars could have lived. We went up the steep incline of Mulholland Drive and stopped at the observation point to look down and spot the iconic Hollywood sign. 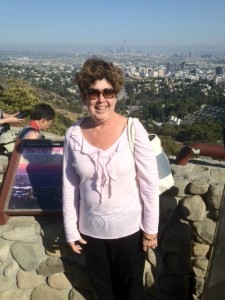 Then we all climbed back aboard and cruised the Hollywood Hills and vicinity area for glimpses of the famous and near-famous. We saw the alleged chimneys of Katy Perry’s house, Jennifer Anniston’s alleged driveway, Tom Cruise’s alleged flagpole (no jokes, please!) and Ringo Starr’s alleged carport, not to mention Ellen DeGeneres’s alleged construction site. We drove over to Beverly Hills and admired the spotless streets and beautiful landscaping. And tall palms. Very tall palms.

The one actual alleged star’s home we got to see was Lucille Ball’s house, which was on a pretty corner lot, one of very few properties in the area not obscured by tall hedges or imposing fences. We’ll probably never know if anything we saw was actually real, but when you’re having fun and leaving the driving to somebody else, who really cares?

On Tuesday, we set out to do what we do best; junking! Since it was a mid-week day, there were unfortunately no flea markets to explore. Damn! I guess shopping The Rose Bowl will have to remain on my bucket list until my next trip out. The next best thing was a shopping center called Whizin Market Square in Agoura Hills that was chock full of antique shops. First stop was A Beautiful Mess, where owner Kymberley has curated a gorgeous collection of rustic and industrial finds in a setting straight out of a movie set.

Like this bed. I hope my drooling all over it didn’t embarrass Ki.

Our next stop was right next door at Agoura Antique Mart, where this eye-catching vignette made us both stop and reach for our cameras.

Even though I have to fly home with already over-stuffed luggage, I picked up a few treasures, including this adorable find.

We had to force ourselves to stop for lunch, but the menu at Hugo’s had tons of yummy, healthy options, including this surprisingly delicious sipper.

Guess I’ll be shipping some stuff home, huh? After lunch we headed over the mountains to the beach, specifically Venice Beach. For this East Coast girl it was wonderful to get that first glimpse of the blue Pacific Ocean as we rounded a bend in the road. After admiring the beaches, it was back to shopping. We stopped in at Urban Country in Venice to browse around at the owner’s truly unusual offerings of antique signage, carnival and amusement park pieces and more, like this huge paint on canvas vintage “freak show” poster.

It was getting late in the day by the time we finished shopping all the cool spots in Venice, but Ki didn’t want me to miss Santa Monica, so off we went. We walked around seeing the sights and then stopped at a trendy bar/restaurant called The Misfit for drinks and dinner. And before heading back home to L.A. we just had to walk down to the historic Santa Monica Pier so I could take in the vintage amusement park. 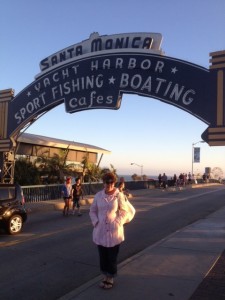 Sadly, there was no time to indulge in cotton candy, the photo booth or the roller coaster. Just time for one more snapshot before two tired junkers headed back to the barn.Where we were awakened at 3:15 a.m. by an earthquake tremor–just a minor 3.8 on the Richter scale, but boy, what a hello from California! Thanks, Ki, for the best mini-vacay ever!