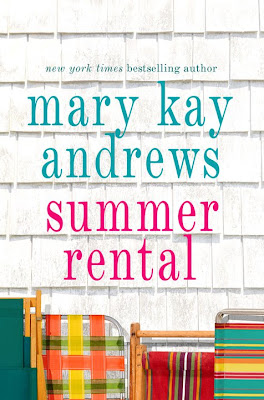 Things are ramping up around the MKA ranch these days. My latest book, SUMMER RENTAL, comes out June 7. Yay! It’s been a two-year stretch between novels (THE FIXER-UPPER came out in 2009) and that’s a loooong time in the life of a person who writes commercial fiction. We are busily planning a fun launch party to be held at our favorite local restaurant, Feast, in Decatur, GA. on June 6, as a benefit for the Girl Scouts of Greater Atlanta. You can buy tickets here.

Also, we’ve got what I think is an especially sweet deal for all you moms (and others) who got ereaders (like a Nook, Kindle, Sony or iPad) for Mother’s Day. How’s this? For the four weeks leading up to publication of SUMMER RENTAL, you’ll be able to download one of my favorite earlier novels, HISSY FIT, for only $1.99! (It’s usually priced at $9.99)That’s less than a Big Gulp from the Toot n’ Tote, right? Let’s see, what else? Oh yes, plans are moving along for the Summer Rental book tour, which kicks off here in Atlanta on June 7, taking me to places like Mt. Pleasant, S.C., Raleigh, Fairhope, AL, Houston,Chicago, Cape Cod, the Outer Banks of North Carolina–where the book is set, the Jersey Shore (do you think Snooki reads?) Rehoboth Beach, DE, New Orleans, and finally, New York and the Romance Writers of America national conference. When I come home from the road, I’ll do a round of signings in Atlanta and Savannah. In between, I have to finish writing the next friggin’ book and turn it in so that it can be published next summer.Doesn’t sound like I’ll have much time to spend at our own Summer Rental on Tybee Island, does it?
And with all those book signings, I’ll probably have limited time for junking, which means I’m doing a good bit of pre-emptive junking these days. Just this past weekend, Mr. Mary Kay and I joined 40 neighbors on a Mother’s Day weekend golf outing to the North Georgia mountains. He golfed, I junked. That’s how we roll. Junk posse member Jinxie and I toured a flea market in Dillard, where, among all the tube socks, VHR tapes, Avon products–and scattered outbreaks of vintage, I spotted somebody selling actual headstones. 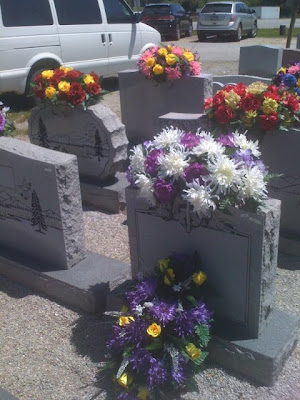 To be fair, that part of Georgia is famous for its granite quarries. But still, headstones at a flea market? I did manage to score a couple of cool old table-top pinball games–one of which is missing glass and is non-functioning, but nonetheless way cool. And Jinx found an old-timey water jug that reminded her of the one her grandmother kept in the fridge. My grandmother had one too! I guess it was a ’60s thing, but no water anywhere tasted colder or sweeter.

Leaving Dillard, we drove down to the charming town of Clayton, where we had lunch at the adorably old-timey Clayton Cafe before strolling through some antique shops.

In one shop, I bought a pair of vintage children’s water-skis, which would look awesome at a beach house, although probably not ours, since we are now officially out of wall-space at The Breeze Inn. 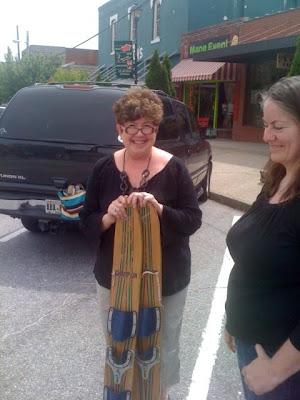 They are destined for my booth at Seaside Sisters. And then, in the never-say-die spirit of the weekend (our husbands played 27 holes both days)we wandered down to The Old Mill Antiques Market in Clarkesville. Here is where I made my final–(and favorite) purchase of the weekend, a vintage Nestea iced tea dispenser. 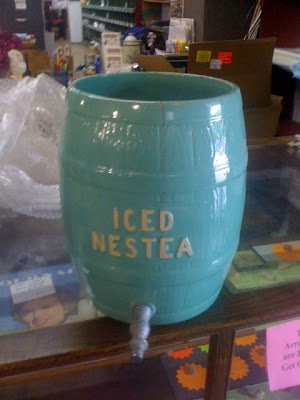 Sadly, it has a large crack in it. But the color is my favorite shade of nearly Jadeite green, and it reminds me of my late mother, who used to drink gallons of Nestea (instant)iced tea. I think Mr. Mary Kay can probably put some epoxy to keep my dispenser together, and even if it won’t technically hold water, the memories it holds will be priceless.

12 thoughts on “Getting Set for Summer Rental”