Ever since we moved into our new old house last November and filled up the entire ginormous basement with stuff,Mr. Mary Kay has been issuing dire threats–like no new junk unless the old junk goes away. So today, we did it. The Junk Queens’ First Ever yard sale extravaganza.

In otherwords, my big fat sell-off–conducted with a few choice friends/accomplices. For weeks now, we’ve been sorting and pricing the stuff down in the basement. The good news was that I was able to empty lots of boxes that never got unpacked from our first move four years ago. I found stuff I’ve been hunting for all these years. Like the cookbook Katie and I made together when she was in high school. We put it in a looseleaf notebook and called it TASTES LIKE CHICKEN, because when she was a picky toddler,we’d always promise her that anything new tasted just like chicken. I also found Andy’s baby book–which was so fitting, since today was his 21st birthday. Yes–boomerang boy is 21! He and his buddies have had a day-long boy fling–golf all day, then tonight it’s off to a brewery and yes, gawd forbid, strip clubs. I do NOT approve of titty bars. 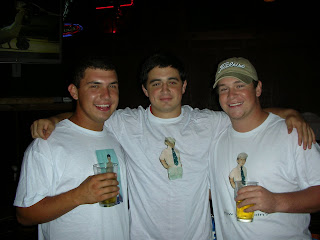 Andy and his two oldest buddies

But it’s apparently some stupid rite of passage. Fortunately, they are being driven around by an older–non-drinking cousin.
But, back to the yard sale preparations. It was back-breaking work. I brought in the big guns to make it happen–namely Katie, who is the queen of organization. She walked around all day clapping her hands and making pronouncements. “We are moving product!” she’d say, slashing my prices. And we did. Not enough product, of course. The old dining room rug went back to the basement. The dining room furniture, including the dining table that would not die–the movers dropped it five feet off the back of the truck and it still didn’t break–finally went to The Salvation Army.
Altogether, I cleared about $600. The Junk Queens and I had lots of laughs, and now the basement is mostly cleared out–and ready for new treasures. 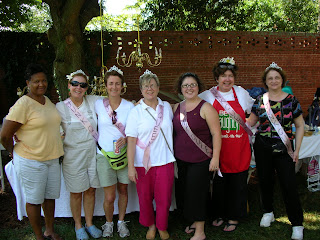 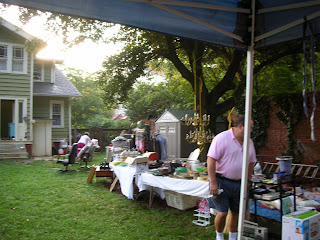 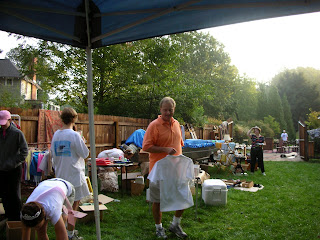 The Big Sale
Can I tell you about the most annoying people in the FREE WORLD? A family of smug vegans, who stomped around amongst our stuff for over an hour, picking out a few books, allowing their super-smart super-smug kids to romp amongst my priceless junk. How did we know they were vegans? Because they had a long boring conversation about veganism with another troll-like couple of granola-heads who wandered in.By the time they finally parted with their paltry five bucks worth of stuff we were ready to pelt them with bacon and organ meats.
Another hateful couple spent an agonizing amount of time debating their purchases. Then, when they’d finally made up their pea-like minds, after insulting all of us in one way or another they wanted to NEGOTIATE one price for the treasures of five queens. The woman went so far as to comment that we’d come up with a “shrewd marketing ploy.” Shrewd? SHREWD?? We’d all been up since 5 a.m. We were hot and tired and cranky and in serious chocolate deficit. And she’s suggesting that we’re some kind of cabal of robber-baron masterminds? She’s lucky we’d already sold all the sharp implements.
Sorry for the rant, but really people. Here are the basics of junk etiquette.
1. Hire a freaking sitter. Or if you must take your children along for the hunt, keep them under control. Do not allow your darling three year old to take a vintage hat and stomp it into the mud, and then try to bargain the price down.
2. No returns! Today some goof-ball bought Queen Nancy’s vintage cherry drop-leaf table, carted it off, and then returned it an hour later, saying he’d changed his mind. NO NO NO! Nancy could have sold the table twice during that hour.
3. This ain’t Haverty’s. Yes, the table has scratches. That’s why you’re getting a 70-year-old solid mahogany piece for $200.
4. If I tell you I’d prefer cash, and suggest that you visit the ATM half a mile away, this is a strong indication that I don’t know you from Jack, and am not in a mood to cut you some slack.
5. Play nice. You’ll get along a lot better with me, and the rest of the junking world.