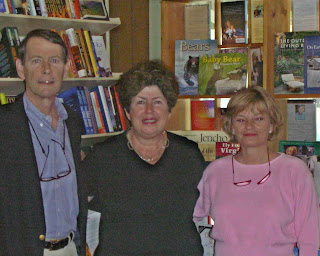 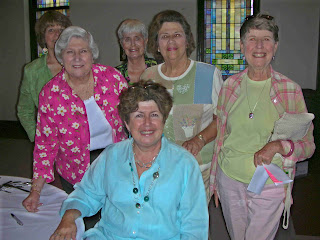 Last Saturday the old mister and I travelled to Franklin, NC, where I spoke at a benefit luncheon and book-signing for the local library.
The old mister went along on the premise that it would be much cooler in the mountains–and I might have lured him into driving with the promise of some hot hotel nookie. I’m not saying I did, I’m not saying I didn’t. The luncheon was held in the beautiful parish hall at the First United Methodist Church, and at left you see me and some of the lovely ladies of Franklin. The mountains of NC are full of Floridians this time of year, and Franklin is just about ‘et up with ’em.
The big thrill of the day for me was meeting the gracious lady in hot pink on the far left, Margarita, who came to meet me and tell me that she had gone to junior high and St. Pete High with my late mom, many years ago–class of ’51, to be specific. The ladies (and a few men) bought lots of books, and it was much cooler in Franklin. Afterwards, Mr. Mary Kay and I tooled on down the road to Highlands, where we were staying for the evening. We’d hoped to stay someplace swanky like the Old Edwards Inn, but to my dismay, it was full up, as it turned out that Bob and Elizabeth Dole and a whole passel of Republican types had taken over the inn for some kind of summit. Me being the suspicious type, I figure they were plotting which country to invade next. We managed to do a little shopping and strolling in Highlands, and I wandered into Cyrano’s Bookstore, a wonderful independent store I hadn’t ever been in before. I was struck by all the famous writers who’d had signings there recently, including Pat Conroy and Cassandra King (they’re married–to each other) just two weeks previously. Of course I immediately got my panties in a wad because I’d never been invited to sign at Cyrano’s. Once I introduced myself to owner Claire Simpson I learned that she’d been trying for six months to get me to have a signing at Cyrano’s. Turns out Claire is a Savannah gal, and a transplanted Floridian. She and husband Arthur are extra cool. So….come November, I will be signing BLUE CHRISTMAS at Cyrano’s, and hopefully by then Bob and Libby will have moved on.
P.S. We had an amazing dinner at a restaurant in Highlands called On The Verandah. I highly recommend it.

3 thoughts on “On the Road Again”