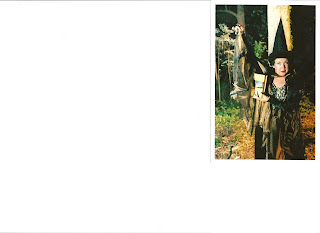 One of my favorite holidays, Halloween, is right around the corner, and for once, it’s caught me flat-footed. Oh sure, I’ve stacked corn stalks by the porch columns, and piled multi-colored pumpkins and gourds and mums by my front door. Yesterday, I even tacked up some scary window shades that make it look like a skeleton and a witch are peeking out of my second-story bedroom windows. But Andrew, our 21-year-old son who is “temporarily” living at home again, says I’m a slacker.
Time was, I spent weeks planning and executing our Halloween décor. We have a “Holiday Spirit” contest in our neighborhood, and at one time, we’d won it four or five years in a row.
Did I mention how much I love Halloween? I mean, what’s not to love about a holiday built around candy and dressing up in an outrageous costume? No gifts, no cards, no newsletters to write—just an orgy of chocolate and make-up. We always decorate the house, inside and out, and I make a huge pot of chili. Parents with trick-or-treaters stop by for a bowl of red and a cold beer, and friends in the ‘hood know to head over to our house as soon as they’ve handed out the last of the Snickers and M&Ms.
I’ve even written a Halloween themed mystery, STRANGE BREW, which was the fifth in my Callahan Garrity mystery series, which I wrote under my real name, which is Kathy Hogan Trocheck. Time was, I used to do always dress up in a costume to have a postcard made for each book. For HOMEMADE SIN, I was a nun. For HEART TROUBLE, I was the Queen of Hearts. And for TO LIVE AND DIE IN DIXIE, I rented a full Scarlett O’Hara green velvet rig. MIDNIGHT CLEAR meant I dressed up as Mrs. Santa. To promote my book-signings for STRANGE BREW, I had a costumer friend custom make me a gorgeous witch costume. The costume was black satin, with black and gold brocade insets, a full, flowing skirt, and a black and gold braided corded sash. The hat was enormous, with bold and black chiffon scarves billowing down from the brim. I had my photograph taken in it, and postcards made up.
My children swore I wrote that book as an excuse to have my very own witch costume.
I never denied it.
For the house decorations, every year I brain-stormed for days, trying to come up with a theme. Then, my sister-in-law, Jeanne, and the kids and I would build it. One year, we were the Black Cat Café, with giant black cats parading across our front porch. Jeanne, my sister Susie and I, dressed up in waitress costumes and handed out candy from the front porch.
Another year I draped the front porch as a fortune-teller’s tent, and Susie and I were gypsies, complete with crystal balls.
One year, I wasn’t even home, but managed to get the house decorated before leaving for a trip to California. The theme that year was Rock n’ Roll Heaven. I bought sheets for a buck from the Goodwill, then tie-dyed them blue and white and tacked them across the front porch. We cut out stars from cardboard, covered them with foil, and wrote a dead rock star’s name on each one—Elvis, Richie Valens, The Big Bopper, Janis Joplin, ect.
But our crowning achievement was the year we created our own Big Top Circus. I went back to the Goodwill and bought more sheets. I dyed half of them red, and half yellow. Then I cut them into strips and sewed them into red and yellow striped “tent” panels, which I again stapled all around the front porch. Over the porch entry, we made a huge clown’s head out of canvas stapled to a plywood frame. To enter the porch, you had to walk through the clown’s open mouth. On the porch columns, we tacked up signs–“See the Bearded Lady”—“Lion Tamer” and my favorite—“See the Elephant—5 Cents.”
We all dressed as clowns and had a great time with the hordes of kids and parents who always descend on our neighborhood every year. Because the word has gotten out that residents in our ‘hood always go over the top for Halloween, people drive over from miles away—sometimes bringing in vanloads of kids, to share in the fun.
The year of the circus, we’d given away what seemed like thousands of candy bars. We’d retired to the kitchen with the grown-ups, sipping beer and eating chili, while the kids were all camped out in the den, counting and swapping their swag, when my daughter came in with a look of alarm on her face. “Mom,” she said. “There’s a strange kid sitting in the den eating his candy.”
“Oh honey,” I said, “he probably came in with one of the neighbor’s kids.”
“No,” she insisted. “Nobody knows this kid.”
So I went into the den, and sure enough, there was a pint-sized pirate happily sorting through his bag of treats. He couldn’t have been more than five or six years old.
“Hi,” I said. “Whatcha doin?”
“Eatin’ candy,” he said calmly.
“Do we know you?” I asked.
“Nope,” he said.
“Does your mom know us?”
“No. But she said I could come in and see the elephant.”
“Elephant?”
“The sign said I could see the elephant,” he replied.
A hasty check revealed a car, parked outside at our curb, its hazard light blinking while the mom patiently waited on her pirate to check out the elephant.
Since then, we do try to monitor the crowds a little closer.
This year, sadly, there won’t be time to manufacture a circus, nor even a fortune-teller’s tent. But we’ll have the chili—and plenty of candy.

1 thought on “The Be-Witching Hour is Upon Us”