It’s really hard to start a new book. I spend weeks thinking about it, scribbling down ideas, consulting with my editor and my agent. I’ve known for months now that my next book would be about a woman starting over in life. I knew she would be moving to a small town in Georgia, and struggling with change. I knew I wanted the book to be a “fish out of water” story.

When I start a new book I almost always decide on the title first. Many times I have a title before I know what the book will be about. That’s the way it worked with HISSY FIT. I was literally taking a bubble-bath, pouting about some injustice that had been visited upon me. I vowed that I would just have to “pitch a hissy fit.” And as soon as the thought ocurred, I knew I had a book title. All I needed was a plot to go with the title.

This time around I started with a concept. I’ve always been fascinated with the idea of “flipping” a house. Of course, flipping is all the rage these days. I’ve got to believe that Bravo-TV’s Flipping Out got huge ratings. I know I watched every episode at least once. And every yuppie with a Home Depot credit card and a power drill thinks they can buy a house on the cheap, slap a coat of paint and some new tile on it, and make thousands in profits. My own mother, who sold real estate in St. Pete for more than thirty years, flipped houses before her death, and she absolutely loved the process.

So the new book is called THE FIXER-UPPER. It’s about a young woman named Dempsey. And I don’t want to give away too much of the plot yet–mostly because I haven’t really started writing yet. Last week I visited the town that will be the inspiration for the small town where Dempsey starts her life over again. On the map it’s called Griffin, Georgia. I went down to Griffin, which is about an hour south of Atlanta, last week. A friend of a friend drove me around, showed me the town’s high and low points, and filled me in on the local hot gossip. Griffin, like Madison, where I set HISSY FIT, has the feeling I need. But Dempsey’s town will probably have a fictitious name, because I intend to have all kinds of stuff happening there, that could not, and would not happen in the real Griffin. Besides, I don’t want to piss off my new friend’s neighbors if I decide to say something unkind or unflattering about Dempsey’s new home. Don’t want Irate Irene getting on my case again!

While driving around my friend took me past a house that will do nicely as a stand-in for the house Dempsey intends to flip. In my mind, Dempsey’s family’s old homeplace is called BirdSong. Here’s a photo of the house in Griffin. 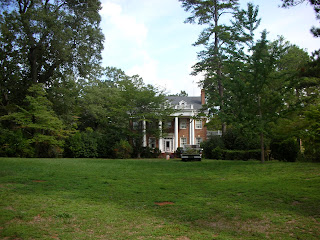 So there you have it. A peek into the creative process of an extremely disturbed mind. Probably what my kids call TMI–Too Much Information.