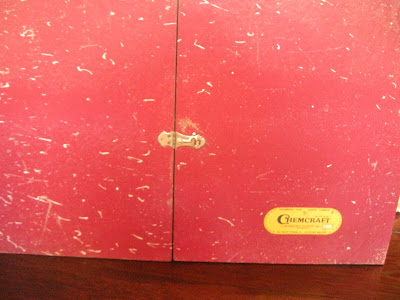 Friday’s round of estate sales started with an early-morning outing to the far suburbs of Atlanta, which was unusual for me, since I usually stay ITP–or inside the perimenter. The sale was in a subdivision of large newish homes–again, not somewhere I normally stray, simply because I assume the good old stuff will be found in dinky cottages in in-town neighborhoods. But the sale ad looked promising, so off we went. Everything was clean and well-organized, laid out in the large driveway and garage–again, not the norm. I’ve gotten so I actually don’t trust a potential sale unless there’s a towering pile of mouldering mattresses at the curb, a dumpster in the front yard, and the heady aroma of cat piss and mildew wafting from the front door. Can you believe it–the pros running the sale had a basket of fresh-baked brownies and cold complimentary bottles of water at the cash-out table. Say what??? I was highly suspicious, to say the least. But the stuff was actually pretty good, and the prices were only slightly inflated. 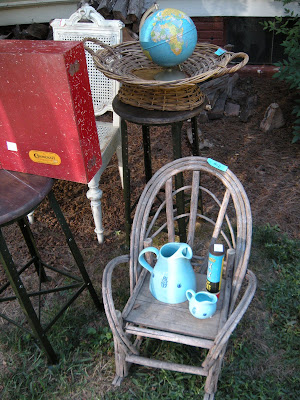 I managed to score a willow child’s rocking chair, a Replogle globe, the USA pottery pitcher and creamer, a Pickup-Stix game, a repro ice tea decanter, and an intriguing 1940s Chemcraft chemistry set. Went on to another sale, where I found an awesome hand-caned shabby chic chair and a pair of cool industrial looking lab stools. 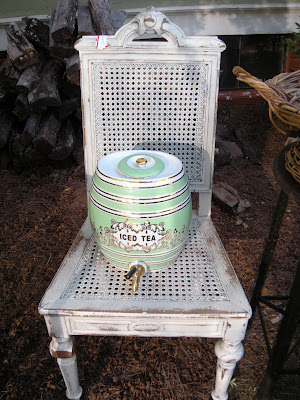 Still later in the day, at an intown sale, I bought a huge chippy picture frame, and what I’m assuming is a repro tin Coke bottle thermometer.
Once I got home, I took a good look at the Chemistry set and was astonished to find that it promises fun with atomic energy! WTF? There are lots of nifty test tubes and beakers and stoppered bottles of chemicals. Oh yeah, and a bottle containing an alleged URANIUM ORE as well as a Radio Active Screen which looks a lot like cardboard to me. 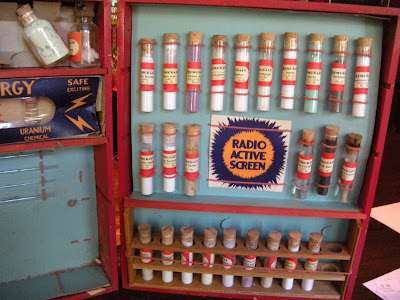 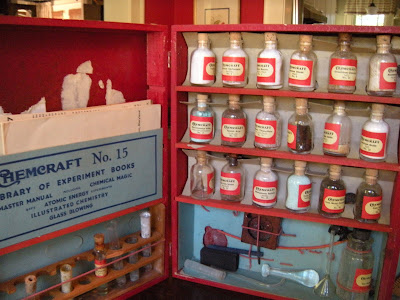 Cork-stoppered glass bottles of chemicals Um, yikes. I’m actually having second thoughts about putting this in my booth at Seaside Sisters because I’m afraid some little kid (or Tybee miscreant) will yank it down off a shelf and smash all the glass bottles–or swallow some of the alleged strontium, not to mention accidentally set off some not-so-fun nuclear incident. So…all you pro junkers out there–any suggestions on how to sell a vintage chemistry set without harming life on this planet as we know it?

7 thoughts on “Better Living through Chemistry”