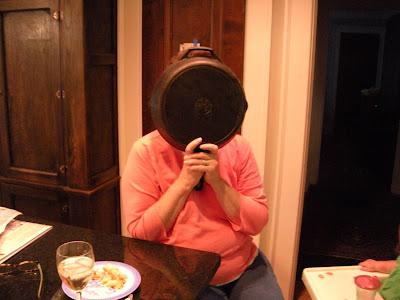 Lick-skillet Love
On Friday I went tooling around to some estate sales. At the last one of the day, I was at a sale with ridiculous prices. All I bought was a $7 skillet for The Breeze Inn, and a pair of ’40s black satin slips. As I was leaving two cheerful women were loading their SUV with rakes and shovels that they’d bought. “What’d ya get?” they called. When I told them I’d bought a skillet, one of them asked “want another?”. Well, sure! They told me they’d just found two old skillets on a curb, and although they were going to keep the smaller one, they’d be happy to GIVE me the larger one. “Follow us,” they said, telling me they lived just around the corner. So I drove around the corner, pulling into their drive-in behind them. And the random thought occurred to me: what if these were not harmless, slightly butch-looking women? What if they were serial psycho killers? What if they were planning to lure me into their home with promises of a free skillet, and instead planned to sell me into white slavery? I know, I am slightly, er, OVERAGED for white slavery, but these are the things that occur to somebody who makes a living making up stuff. So I called Mr. Mary Kay and read him their license-tag. “If I don’t come home,” I told him, “call the cops!”. Of course, they came out moments later with the promised skillet. It had a little rust, but we cleaned it up and seasoned it in the oven with some vegetable oil, and it is now good as new–ready for the next fish-fry at The Breeze Inn. And I have a new appreciation for the kindness of strangers. As long as I have their license tag written down.

8 thoughts on “The Kindness of Strangers”