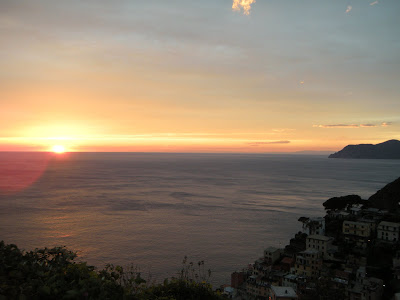 Sunset over the Meditteranean, at Cinque Terre 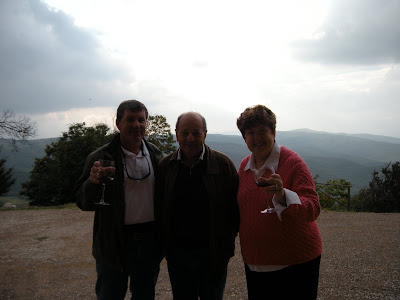 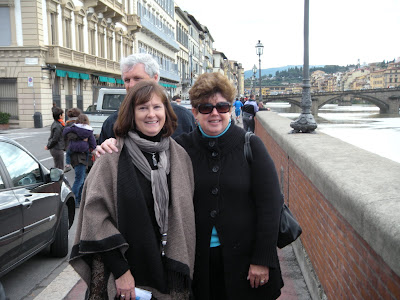 Mike and Shay and me, windy day in Florence 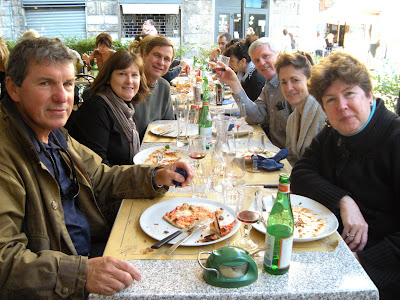 Lunch at a sidewalk cafe in Florence

Fair warning: this is a loong post. it’s the modern-day version of your Uncle Seymour’s grainy slide-shows of his vacation in Peoria. Unlike most of my posts, there will be absolutely no junk, and no whining about what hard work it is writing a book. And there will be gushing. So just deal.
What can I say about a trip with four long-time dear friends, a trip to Tuscany, yet? It was bravissima. Last week we flew into Florence with longtime friends Jinx and Mike, and Jack and Shay. Shay, who is a bargain travel phenom, found us an unbelievably cheap package deal, so cheap we just couldn’t say no. It was a first trip there for all of us, I think, so we allowed ourselves to be total tourists. Looking back, I’m amazed at how serendipitous the week was. Armed only with our Garmin (whom the boys nicknamed Betty), and our Rick Steves’ and Fodor’s travel guides, time after time we managed to stumble into once-in-a-lifetime experiences. We stayed in a villa outside a castle in a tiny village twenty minutes from Florence, and we had two rental cars for exploring. And did we explore! We checked out the market in a little town named Edna–no wait, that’s my grandma’s name, maybe it was Elsa. Never mind. It was a cool town and we strolled around and bought big hunks of salami and cheese to bring home. Another day we visited the ancient walled villages of Volterra and San Gimignana, which our friend Jack insisted on referring to as San Chimichanga. In Volterra, as we approached a hill overlooking the ruins of an ampitheatre, we heard the sounds of opera floating up. A movie was being filmed, and at that moment, a pianist was accompanying a fine soprano who was singing Mimi’s aria from La Boheme–(the only opera I’ve ever actually attended). Another day we explored Montalcino, which is known for its fine local wineries. At the tourist information office, Jinx asked about touring a winery and was given a phone number to call. The person who answered the phone didn’t speak much English, and like the rest of us, Jinx’s Italian is pretty much limited to words like vino, zuppa, pan and toiletta. Still, she managed to arrange a tour at a winery within walking distance. The wine gods were with us, because the proprietor of Tiezzi, Dr. Enzo Tiezzi, was so sweet and welcoming, we quickly forgot about the language barrier. He proudly showed us the winery, let us taste his exquisite Brunello, even let us climb a ladder and peer into a vat of fermenting grapes. It was an unforgettable day. Our visit to Siena was just as memorable. We were in awe of the Duomo there, and discovered we were lucky to have timed our visit for October, one of only two months of the year when the cathedral’s breathtakingly detailed inlaid marble floors are uncovered for the public. Since we only had a week in Tuscany, alas, we allowed ourselves a single day to explore Florence. So much beauty, art, and culture, we found ourselves nearly suffering from sensory overload. We hadn’t booked an advance tour of the Uffizi, but we did manage to take in the Duomo, the Medici chapels, and lastly, the Accademia, where we circled round and round Michelangelo’s 17-foot-tall David. And when I say we, I mean, Jack, Jinx, Shay and I, because Mr. Mary Kay, who’d obligingly trotted through two other museums as well as FOUR churches on this trip, decided to repair with Mike to a nearby bar to rest his barking dogs. Mike’s dogs musta been screaming, since he, Jinx and Jack clambered up all 400-something stairs at the Campanile. After all that culture, we threaded our way through the narrow cobblestoned back streets to a restaurant recommended by three different friends. Il Latini definitely lived up to its reputation. Over the course of more than two hours, we somehow managed to plow our way through SEVEN courses, fortified by two gigantic carafes of red wine, plus prosecco, grappa and limoncello. And just after we’d been presented with the bill, which amounted to about $45 apiece, the owner dropped off three bottles of the restaurant’s own chianti, as a sort of party favor. On Monday, we drove two hours to a rugged area of the Italian coast called Cinque Terre, for the five picturesque towns strung along the steep cliffs overlooking the Mediterranean. We walked a one-mile cliffside stretch called the Via Dell’Amore–Italian for Lover’s Walk. All along the way, tucked in amongst the drop-dead gorgeous scenery, were hundreds, probably thousands of little padlocks, fastened to chain-link fencing–symbols, we learned, of couples’ declarations of exclusive devotion. As we were driving away, we were treated to what must have been the most glorious, technicolor sunset we’d ever seen. And then, on our next-to-last day, we drove around the chianti trail, sampling more wine and divine food. And because everything about this trip was serendipitous, there was one more splendid sunset, this time with the soft green and golden hills of Tuscany in the foreground. I think my favorite town of the day was Greve, but it’s all fast becoming a blur, making me wonder: did we really do this? Spend a week in Tuscany? I wrote Facebook posts on my iPhone most days, just so I’d have a reminder of what we’d seen and done. And I have the photos to remind me. And a handful of chianti-scented wine corks. Oh yeah, and probably five extra pasta and pizza-related pounds. But it was so worth it. Definitely. End of gush.