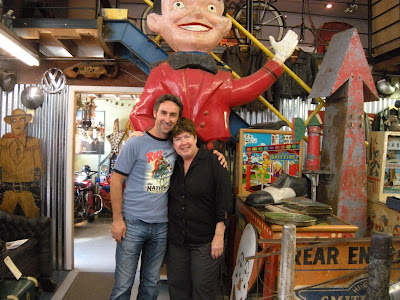 Me, Mike and the Phillip Morris bellhop 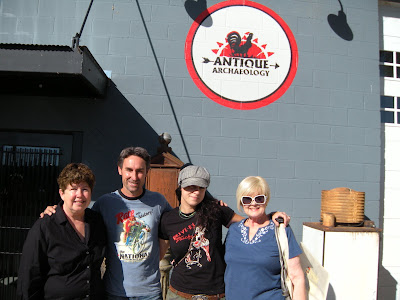 Me and Mike, with Danielle and my junk buddy Barb 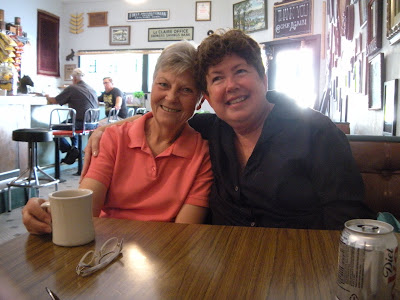 Mike’s mom Rita, a sweetheart for sure 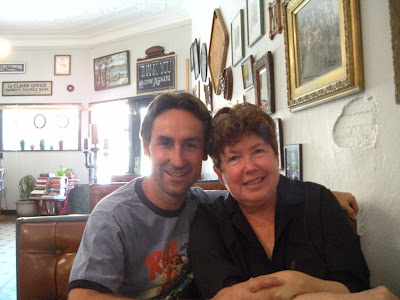 Hanging out at Pelo’s coffee shop 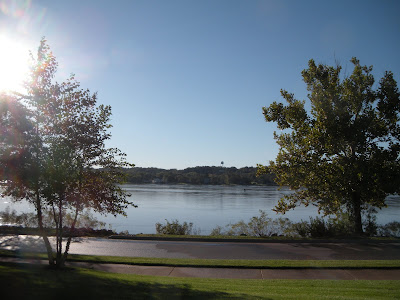 Beautiful LeClaire’s Riverfront View of the Mississippi
Okay, I admit it. I’m a little bit starstruck. Like five million other Americans, I’ve been watching AMERICAN PICKERS since it began airing on The History Channel last year. I learned about the program from my junk buddy Sue over at Vintage Rescue Squad. Once I saw the show, a little bell rang. I knew this guy. Yeah. When “Savannah Blues” was first published, way back in 2002, I got an email from this guy named Mike Wolfe. He told me he was a picker, and was intrigued that I’d written a novel about an antique picker. We corresponded, and he sent me a short video clip of his picking adventures, explaining that he was trying to sell a show to a cable network. Riiiight, I thought. Like that’s gonna happen. Shows you what I know. It took Mike seven or eight years of hard work, but darned if he didn’t sell a show. And it rocks. When my friend Barb and I set out on our Midwest Junk Junket, starting in Dayton, Ohio this week, Barb pointed out that our eventual destination, Champaign, Illinois, was only a few hours from LeClaire, Iowa, where Antique Archaeology is based. So…we drove to LeClaire. What the heck? I’d never been to Iowa, and maybe we’d run into Mike, the junk hunk. Suuuure. We got to LeClaire at about six Wednesday night, and drove around, trying to locate the shop. It’s a small, gorgeous town, set right on the banks of the Mississippi River. So picturesque, with neat little shops and restaurants downtown. No luck. So we turned a corner, to look for the library, and instead, drove right up to a building with the trademark Antique Archaeology truck parked around back. We got out of our car, decided it must be Mike’s house, but did not want to engage in what my daughter would describe as creepy stalker-girl behavior. We took pictures of ourselves with the truck, and then went to dinner at a restaurant just down the block. Wouldn’t you know it, walking back to our car afterwards, I spotted a familiar-looking guy walking two black dogs down the street. Mike? Mike! We stopped and chatted. He remembered our correspondence, and we agreed to meet for coffee this morning. If you ever get to LeClaire, definitely stop at Pelo’s, which is in a charming old building, run by the third generation owner. Maybe you’ll run into Mike, or at least Mike’s mom, Rita, who is just a total sweetheart. She plays Mrs. Santa Claus for the community children every Christmas. Love her. And Mike–ya gotta love a guy who spends time with his mama, right? And how can you not love a guy who sets up a facebook page for his Border Collie, Ruby? Long story short, we were lucky enough to spend an hour or so with Mike and his Mom. Did not get to meet Frank, darn it. We went to the shop, got to meet Danielle for a skinny minute, before she left to run errands, and best of all, we got to see some of Mike’s favorite picks, up close and personal–the giant Phillip Morris statue, the carnival games, the big red arrow, the Laurel and Hardy heads, ect. Mike’s passion for “rusty gold” is so genuine, so infectious, it’s no wonder his show is a huge hit. He’s like a kid who’s been given the keys to the candy store. And here’s some of what he shared with us: it takes a crew of nine people to shoot the show. They work two weeks on, then two weeks off. California is the next pick–starting in San Diego and working north to San Francisco. Danielle has become such a celebrity, they’ve had to hire three other people just to help clean up and sell their vintage finds, which they actually do sell, either through the shop or on eBay. They get an estimated 10,000 leads for potential picks EVERY WEEK! Mike has bought a shop in downtown Nashville, in an awesome old brick building that used to be an auto plant, and they’ll divide their time between Nashville and LeClaire. We saw pix, and it is going to be amazing, and very accessible to fans who want to visit, buy a T-shirt or an antique bike, and maybe even meet the guys. What else? Oh yeah. They definitely keep up on their tetanus shots.

5 thoughts on “Me and The Junk Hunk”