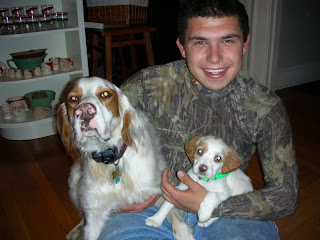 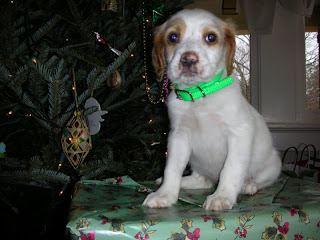 In light of the fact that I have totally lost my mind, I decided to add to the insanity that passes for my life by adding a puppy to the household mix. So.
Please meet Weezie. She is an eight-week-old English setter. Mr.Mary Kay has been talking off and on for some time now about getting an auxiliary dog to supplement the head dog around here, which would be Wyatt. And because Mr. Mary Kay truly is a man who has everything–as I constantly remind him–I was stumped about what to do for Christmas this year. I mean, beyond the standard sweater, fishing stuff and golf shirts. In my quest for an even more complicated life, I called the friend who’d given us Wyatt and asked his advice. One phone call later, I was looking at the website of the kennel where Wyatt’s mother had come from. I thought, for about a hot minute, about surprising Mr. Mary Kay with a puppy on Christmas morning. Thankfully, that thought passed. A puppy, after all, is not quite like a shirt that doesn’t fit, or a set of golf clubs that doesn’t pass muster. So I inquired about whether a puppy would make a nice Christmas gift. Next thing I know, we are loaded up in the Yukon–with Wyatt in one crate, and the guest crate beside it, and headed for Biscoe, North Carolina. A six hour drive. Wyatt must have sensed the gathering storm, because he was uncharacteristically fussy for the first half of the drive. When we got to the kennel, he jumped out of the Yukon, took one look at all the dogs and puppies, and decided to take a dip in the duck pond. We browsed puppies. We looked at bitty puppies, bigger puppies, and mid-sized puppies. We debated color. Wyatt is actually a Llewellen setter, and his coloration is called lemon. We’d thought about branching out to a black and white or even a tri-color. We’d agreed that we might like a girl this time around. But all the tri-color and black and whites were boys. And there was this little lemon gal who kept flirting with my husband. And so it was done. I cradled Weezie in my lap for the six-hour drive home. Wyatt snoozed in his crate. Back at the ranch,the two of them sized each other up. Weezie seemed intrigued, Wyatt seemed indifferent. We think he views her as an attractive nuisance so far. As we’d done with Wyatt when we got him as a puppy, we girded our loins and put Weezie in her crate, on the towel we’d carried her home in, and went to bed. Weezie was not a happy camper. She whined, she whimpered, she wailed. We tried to turn a deaf ear. She persisted. At 3:30 a.m. I tiptoed downstairs, took her from the kennel and settled on the living room sofa with her stretched out on my chest like a colicky infant. She settled down again, and 40 minutes later was asleep. I put her back in the kennel. You know the rest. There was not much heavenly peace around here last night. But on the bright side, she really is adorable, inquisitive, funny. So far we’ve made all the potty breaks outside. And she’s asleep at my feet in my office. I think it must be cocktail time. Oh yes, here’s one more picture–Boomerang Boy, Wyatt and Weezie.