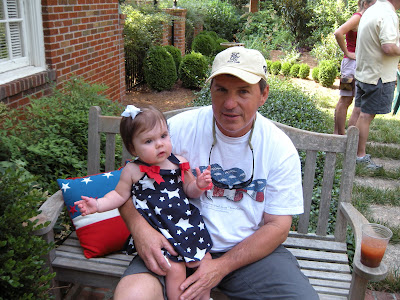 Molly and Mr.MK let the parade pass them by

Here in the small town we call home, holidays are celebrated with a large amount of gusto.
We actually observed the Fourth of July on the Third this year. The day started with ham biscuits and bloody Mary’s at our friends Susie and Dave’s–because they live at the end of our town’s parade route. This was Molly’s first Fourth, but she had a great time. Her Mom and Dad arrived at our house dressed in their true colors and ready to party. Of course, Molly was the real star of the show. 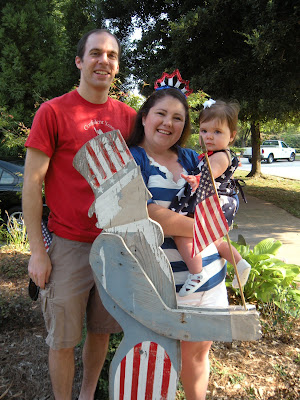 Katie, Mark and Molly with Vintage Uncle Sam
Our parade is strictly a homemade affair. This was a pirate float created by an outfit calling
themselves the Atlanta Pirate and Wench Club. They seemed to be having a great time trying to invade the ‘dale. 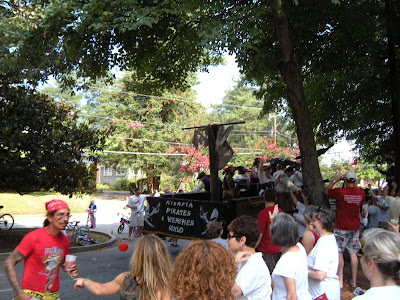 Pirates and wenches invade the ‘dale
It ain’t exactly the Rose Bowl Parade. Kids on bikes, parents in silly get-ups, more kids, riding battery-operated kiddie cars, lots of dogs being walked. Hijinks and tomfoolery are the trademarks of the day, and everybody who wants to gets into the act. 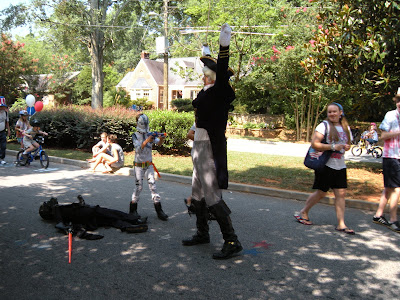 Patriot sword-fights intergalactic enemies
The community club throws theme parties once a month, and has since the 1920s, when our neighborhood was built. This year’s float had a tropical theme, and since parties are what the club’s about, they even had a battery-operated blender whirling up tasty adult beverages. 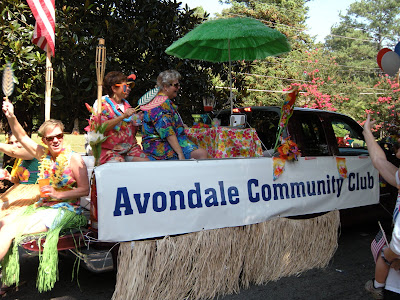 Community club float celebrates in style
At Susie and Dave’s house, we noshed on breakfast treats, including homemade zucchini muffins made from Susie’s bounteous garden, not to mention the aforementioned bloody marys. Many of these were provided by neighbor Billy, who thoughtfully sets up a full-fledged adult beverage stand at the edge of Dave’s driveway, to help out parched parade-goers. Then we set up our own lawn chairs, quilts and blankets to watch the passing spectacle. Some people provide more spectacle than others, but then, isn’t that one of our founding freedoms? The freedom to be silly? 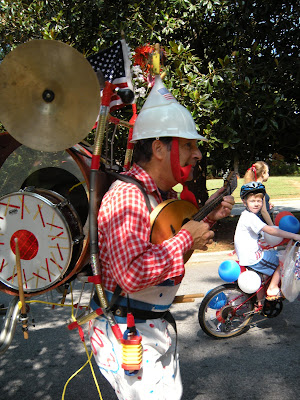 A one-man band plays to his own tune
Afterwards, my family strolled home to begin preparations for our own get-together, a fried chicken covered dish supper for about 20 friends and neighbors. My sister-in-law Jeanne fried chicken for four hours, and we whomped up some ‘tater salad, devilled eggs, and “trailer trash”–which is another silly thing–ice cream sandwiches covered with Cool Whip and drizzled with hot fudge and butterscotch sauce. While Jeanne was frying chicken, I gussied up the dining room table with an antique quilt top and a folk art Uncle Sam made from vintage fabric and sparkler box. When dinner was over, we loaded up our pickup truck with the lawn chairs, and rode a few blocks down the street to the lake, where we set up camp to watch the fireworks, accompanied by a local orchestra. The music was great, the fireworks were awesome, the company superb. Best of all? Molly, not yet one, turns out to love fireworks! She laid back in her daddy’s lap, and enjoyed the show along with about a thousand other neighbors. All in all, a perfect day in a small town like ours. 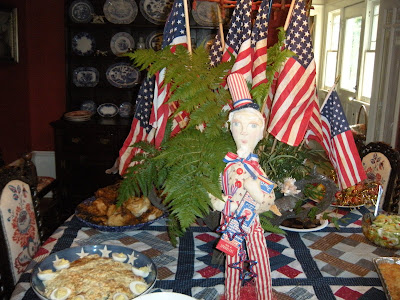 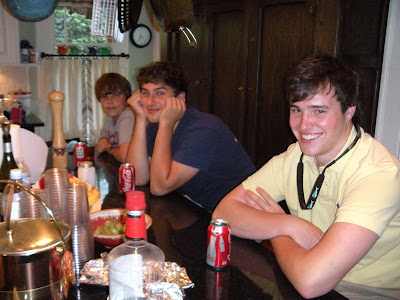 Boyz in the hood–chillin’ before fireworks