Skip to content
When my junk-buddy Sue of Vintage Rescue Squad told me she was heading down Atlanta-way last weekend and wanted to shop at Scott’s Antique Market, we both knew it was inevitable–a junker’s throw-down. We met for breakfast, traded gossip and tales of estate sale victories, and then took off for Scott’s. In the parking lot, we set the rules–a $20 bill (more or less)–and whoever got the best deals would win the contest. Did I mention it was Africa hot that day? I think my flip-flops melted to the asphalt in the parking lot of the North Building. We also applied our super-cool VINTAGE tattoos, which Sue gifted us with. We started with the outdoor vendors, because they’re the ones who sell the kind of junk Sue and I salivate over. 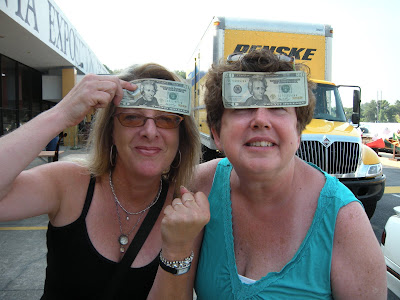 The challenge is issued, and Sue immediately talks smack

Being the seasoned pro she is, (she has two booths in antique shops in Virginia), Sue struck first, at 9:06 a.m. with an outsized letter “S” made from old tin ceiling tiles. 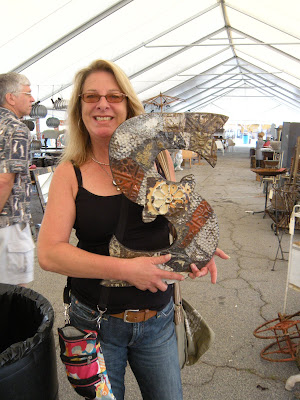 A few minutes later, we were met by blogger buddy Linda, http://ljm-alacarte.blogspot.com/ and after a quick stroll through the inside dealers in the North Building, we headed over to the South Building. I found my first treasures from a dealer who had a trove of gorgeous old flags and vintage bunting. He sold me 3 five-yard pieces for $20. Those, my friends, are destined to decorate our house next Fourth of July. While I was perusing the rest of his booth, Sue wandered over and made a score too. Which meant I had to counter with another $10 purchase. We parted ways for a bit, and I found another great treasure, for $10. As soon as Sue saw it, she threatened to arm-wrestle me for it, but too late, the deal was sealed. By then, we were swooning from heat exhaustion, and were happy to make our way inside the air-conditioned comfort of the South Building. Of course, I had to take Sue over to meet my junk buddy Lulu Redstar. Lulu always has the coolest vintage stuff, not to mention her gorgeous junk jewelry which she crafts from vintage and antique findings. Sue bought some of Lulu’s stuff, and I bought a hilarious 1931 publication called The Sorority Handbook. Good stuff! 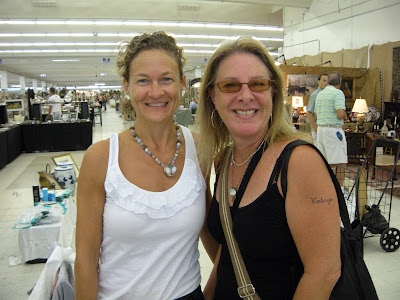 We shopped and gossiped and chatted with some of my other favorite dealers, and had lunch–Uncle Woody’s excellent chicken salad, before I had to shove off for other committments. I think I speak for all three of us when I say a good time was had by all. 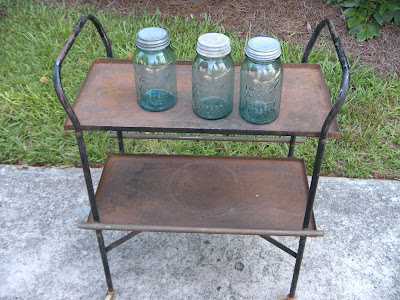 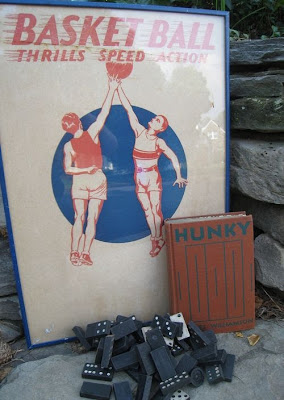 Now, here’s where y’all come in. We’re posting pix of our $20 (more or less) junk throwdown stuff. Leave us a comment right here or here, telling us whose junk is whose. Sue’s or Mary Kay’s? We’ll pick a winner from the correct guesses, and Sue and I will each award a prize–Sue’s is a vintage cigar box full ‘o ephemera, mine is a beachy basket complete with monogrammed Breeze Inn beach towel, autographed copy of The Fixer Upper, go-cups and more. Deadline is Saturday, July 24.

73 thoughts on “A Junk Throw-Down–and a Giveaway!”