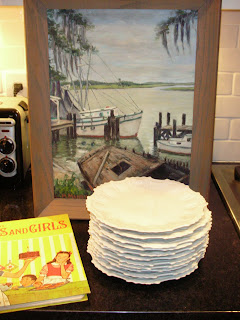 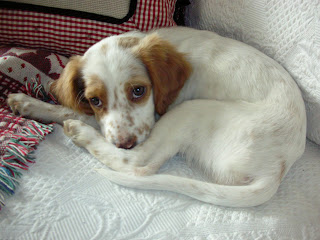 It has been WEEKS since I had a good junk jaunt. Okay, two weeks to be exact. But still…There were a couple of decent sounding estate sales in the AJC yesterday, and I hoped to get up early and hit them. But life got in the way. A case of poopie puppy sent us to the vet, so that ate up the morning. And then I had to go buy baby food and feed it to her. And I’d SWORN by all that’s holy that I would write a whole chapter yesterday. So I stayed home, and I did. I finished Chapter 10 of THE FIXER-UPPER, and I was doing the happy dance all over the place. Only one member of the posse, Jinxie, could saddle up today. But we went to Buckhead and then to Roswell, and then back to Buckhead, and I did find some goodies. My favorite find is the circa 1968 oil painting of the shrimp boats in Thunderbolt, which is a little fishing town just before you get to Tybee Island, outside Savannah. It is destined for Maisy’s Daisy, once I figure out how to spruce up the frame, which looks like it was bought at Lee Wards at about the same time. Also found 12 great scalloped ironstone salad or dessert plates. They are really elegant looking–would make a great wall accent. I’ve decided they might be French–but did the French even make ironstone? Don’t know. Also bought an antique twin brass bed. Very fetching. Here’s a coinky-dink. This week I was checking out the new Gourmet magazine website, which is really nice. There was a neat essay about the Betty Crocker Boys and Girls Cookbook, which was originally published in 1957. The author reminisced about cooking through the book as a youngster. I remember that book, too. Especially the bunny rabbit salad, which consisted of canned pear halves placed on lettuce leaves, with ears fashioned from blanched almonds and tails from “cottage cheese balls.” So very retro. The recipe right next to the rabbit salad is for something called rocket salad. Giggle. I’m sorry, but this is so, giggle, phallic! Perfect for Valentine’s Day, if your sweetie has a sense of humor. You take a pineapple slice for the “launching pad” and inside it you place half of a peeled banana, upright, for the rocket. Now, the “nose cone” consists of half a maraschino cherry toothpicked to the top of the banana. heeehehehehehee. Here’s the link to the essay.
I bought the “new” version of the cookbook, which was updated in 1973. Can’t decide whether I should take it to Maisy’s Daisy, or keep for my own future grandchildren.