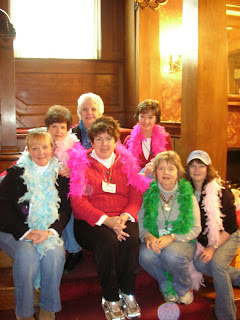 As I was saying before life rudely interrupted…Saturday night’s GoodGawdAmighty Party in Your Nightie event was held at the Fresh Air Home. The home acts as a summer camp for inner-city, under-priveledged or just “in crisis” kids who need a week at the beach. It sits on a gorgeous plot of land right on the ocean, and the old red brick buildings are really atmospheric. Part of the proceeds from the weekend’s festivities go to Fresh Air Home, and part go to St. Michael’s School. We had a fun girl band playing when everybody walked in Saturday night, and the bar was serving the Blue Breeze, our signature cocktail from SAVANNAH BREEZE, all served in fun flamingo or palm tree glasses. In between all the dancing–picture emcee Jeffrey twirling around the floor in his tuxedo, surrounded by a sea of boa-wearing women to “Dancing Queen”–it was that kinda night–we had the final rounds of the Miss Savannah Breeze pageant. The first round consisted of the ladies parading in their festive pajama-wear. Several groups of women had cleverly concocted matching pjs for their posses. The real fun came with the “talent” portion of the evening. And when I say talent, I mean that in the loosest possible interpretation. One gal did a rap about the weekend with her posse. Another read an original poem she’d written. Still another–one of those wacky Middle Georgia girls–demonstrated how to have “big hair” through judicious use of styling product. But the winningnest–and weirdest–talent came from a 60-something retired algebra teacher named Linda who demonstrated a talent she’d picked up from her daughter during said daughter’s sorority rush at Auburn University. This talent is called “butt quarters”. Well, I warned you about the Auburn connection. Let me just say that the talent was performed while fully clothed–albeit in a pair of side-slashed, rhinestone-studded jeans that looked like they’d been freshly pried from the body of some back-alley hoochie-mama. How could we not name Linda Miss Savannah Breeze? Linda and her daughter Happy were thrilled to pieces! After the crowning we had more dancing, drinking, and miscellaneous hilarity. By 10-ish my own sparkle was starting to seriously wear off, so I took myself off to bed, while others did the Tybee pub crawl, which mostly consists of Doc’s Bar. The next morning we met for brunch at the wonderful home of tour operator Linda Odum, for yet more bloody mary’s and mimosas before saying good-byes. Some of the women even stuck around ’til Monday for a tour of nearby Beaufort, S.C., where they hit my favorite shop there, M Designs. Here’s another gallery of photos:
http://spotted.savannahnow.com/galleries/index.php?id=327133