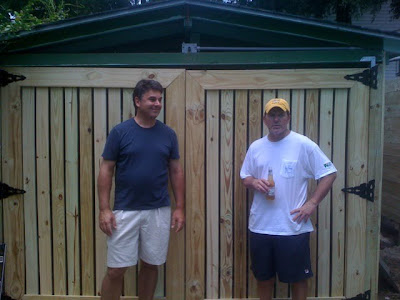 Joel and Mr. Mary Kay with the pause that refreshes

So sorry for the interruption in bloggosity. What with finishing revisions for TFB (the friggin’ book), construction projects at The Breeze Inn, and a LOT of company, I sorta got sidetracked. But no worries. I’m back, and ready to “share”–as they say in school these days. First off, here’s a look at the construction projects completed by Mr. Mary Kay and good friend Joel, who came in from Birmingham just to tackle the difficult, sweaty stuff.

The challenge was to enclose our skanky old carport into a garage, where we can secure our bikes, beach carts, yard tools and yes, my extra junk inventory for my booth at Seaside Sisters. After taking a look around at lots of the original Tybee raised cottages on the island, MMK decided to give our humble garage the same kind of look by enclosing the carport with 1-by-4 vertical boards. He and Joel sunk posts in concrete, then built headers and footers, and screwed down the boards. They even built nifty barn-doors so we can lock up our stuff. Cool, huh? 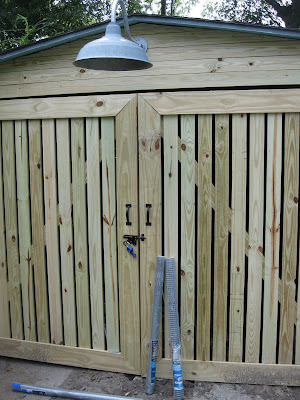 Once the garage was complete, they turned to the outdoor shower. We’d had an area beside the screened porch at The Breeze Inn plumbed with a shower two years ago when we were restoring the house, but had never gotten around to building an enclosure. Again, they sunk posts in concrete, then built the enclosure. For doors, they incorporated two of the old wooden shutters I’d been hoarding from my last trip to the Brimfield Antique Market. Then, they put down a boatload of concrete pavers for the floor of the shower and the area next to the garage. 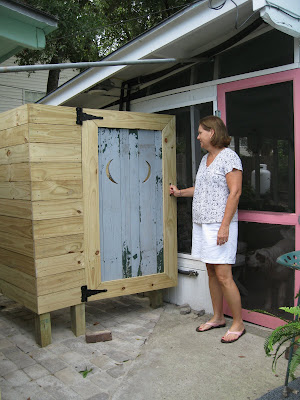 Pam checks out the new shower

Finally, for privacy, Mr. Mary Kay put up a towel rod on the door, so that someone who decides to shower in the buff can simply drape their towel over the crescent-moon cut-outs in the shower door. He also installed four towel or robe hooks made from four old chrome faucets i’d been hoarding from an Atlanta estate sale. 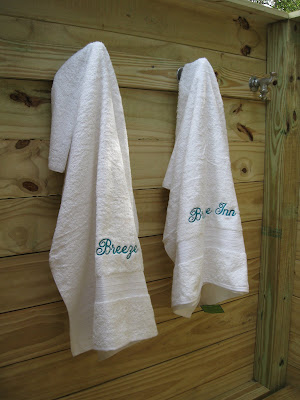 Once the outdoor projects were finished, we decided to play catch-up inside. In the dining room, we hung the two gorgeous bird paintings I bought in Destin while I was on book tour in July, and created a new sleeping area downstairs, moving furniture around and de-cluttering. For the bed there, I bought a pair of beat-up mahogany headboards at the Scott Antique Market for $50 in August. I painted them the same bright turquoise as the hall tree in that same area, and the Mister hooked them up with a pair of salvaged bed rails from our basement in Atlanta. We took a trip into Savannah and bought a nice new pillow-top mattress, and a pair of new feather pillows and mattress pad at Homegoods. And then the fun began. Rummaging around the closets and crannies at The Breeze Inn, I found a perfect white matlesse bedspread from a forgotten yard sale, two huge linen euroshams with a nautical blue piping, a pair of blue and white ticking striped shams, and yet another pair of blue and white quilted shams left-over from the Better Homes and Gardens shoot last summer. Accessorized with a quilt bought at an antique shop in Tennessee last summer, I think the bed looks pretty and inviting. Best of all was the fact that I had all the bed linens pre-hoarded, er, stashed. 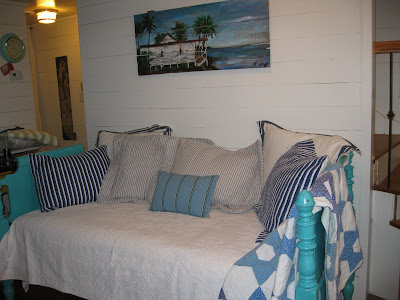 We finished the new sleeping area with only hours to spare before my college roomies from UGA arrived for our chick weekend. We had a great time reconnecting. All of us met when we were living in Creswell Hall at UGA in 1974–except for Sheryl, who roomed with some of us our junior year. Pam and friend Linda are south Georgia girls who come from farming backgrounds. Pam arrived with the best kind of hostess gifts–food! Pecans from her orchard, gorgeous fat blackberries from a friend’s garden, and frozen corn she’d put up herself. We had two nights of feasting. Friday night MMK and I fixed shrimp and grits with shrimp right off the Lazaretto Creek boats. 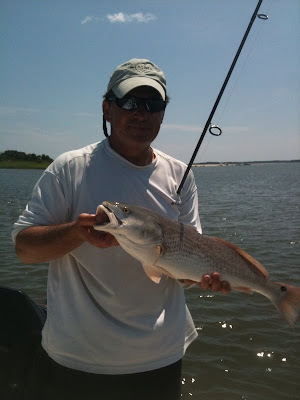 On Saturday, he went fishing and caught a gorgeous redfish, which he fried up for the girls. A Tybee neighbor gifted us with okra from his garden, which Linda expertly fried up. Pam cooked her creamed corn, and baked an awesome peach and blackberry cobbler for dessert. 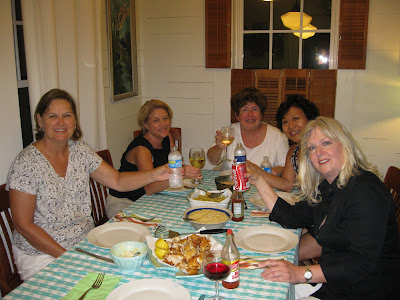 A feast fit for old friends

Sunday morning, we prevailed on Pam to fix us homemade biscuits and sausage before we walked down to the beach for an hour or two. We had such a fun time we’re already plotting our next getaway. And Mr. Mary Kay, who’d originally planned to vacate the premises when the girls arrived, will definitely be part of the proceedings again–because who else is going to provide us with seafood? Or build a garage? Or help us figure out the remote control. Ya see, it really is good to have man around the cottage.